Is Carles Puigdemont living in a parallel world? | Europe | News and current affairs from around the continent | DW | 29.10.2017

Is Carles Puigdemont living in a parallel world?

The deposed regional president of Catalonia, Carles Puigdemont, finds himself in an ambiguous situation. Does that explain his ambiguous behavior? Mariel Müller reports from Barcelona. 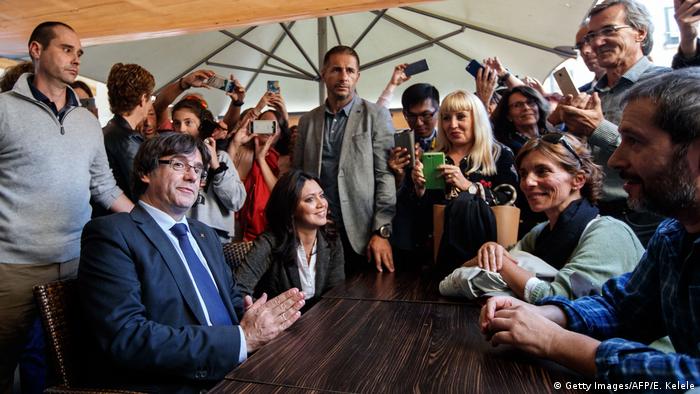 He's sitting in a bar in his hometown of Girona, eating lunch, as if nothing else were going on. A group of basketball players want a photo with him. No problem. Carles Puigdemont briefly steps outside, past cameras and reporters barking questions — "Do you realize you've been deposed?" — poses for the photo, goes back inside and carries on eating.

Almost simultaneously, Catalan TV is broadcasting a recorded "institutional speech" by the region's former head of government. In it, Puigdemont rejects his discharge and asks for "patience, endurance and perspective" in order to move ahead with his independence plan. Positioned alongside him in statesmanlike manner are the Catalan and EU flags.

After the speech, he appears again on live television, just sitting with neighbors, according to the presenter. It looks like a perfectly normal day for Puigdemont. Nothing seems to perturb him, not even when, a few hours later, the restaurant where he's still sitting is besieged by hundreds of curious onlookers and fans. "President Puigdemont," they shout. More cameras track the scene. 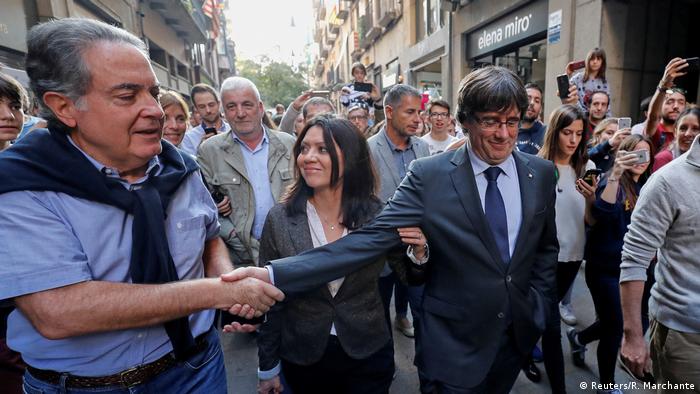 Just another day for Carles Puigdemont?

It appears that Puigdemont is living in two worlds: the Spanish government's and his own.

Chaotic referendums are passed off as valid votes with credible results. Rules are made and immediately broken again: Catalonia's declaration of independence, for example, was originally supposed to come 48 hours after the announcement of the referendum's result, but that stretched to almost a month. And parliamentary votes are celebrated as lawful when they are not — as Friday's on Catalan independence was.

The vote should not have taken place at all "because, according to the law, the parliament has no authority to decide on the sovereignty of Catalonia," according to Oriol Bartomeus, a politics professor at the Autonomous University of Barcelona. Lawyers in the regional parliament had come to the same conclusion. 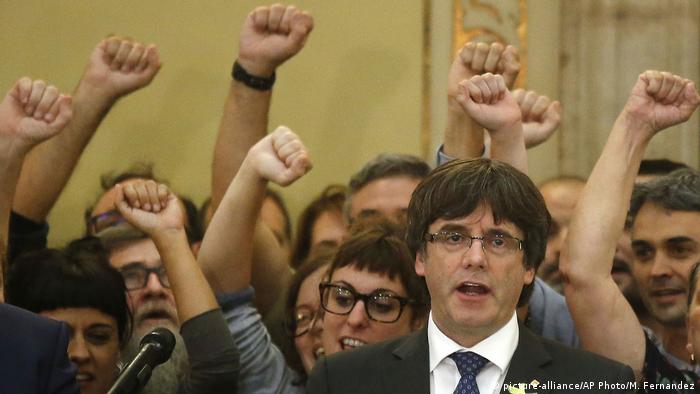 After the short-lived declaration of independence, supporter sang the Catalan anthem

The opposition left the room in protest and did not participate in the vote. Of the representatives who remained, 10 voted against the resolution on constituting "a Catalan republic as an independent and sovereign state." Seventy representatives voted in favor, and the resolution was passed. Two lawmakers abstained.

Read more: The EU must act to calm Spain-Catalonia conflict

The pro-independence movement has appeared weaker recently. It's breaking up into two camps: a moderate wing, which recently pushed to bring forward the regional elections, and the uncompromising element that demanded nothing less than a unilateral declaration of independence. This division became particularly visible when Puigdemont declared independence about two weeks ago, then immediately suspended it.

On the one hand, this was a concession to the left-wing radical Popular Unity Candidacy (CUP), which secured a majority in the parliament. On the other hand, it was a signal of concession to the moderate element of his own party, the Catalan European Democratic Party (PDeCat). The internal division became clearly apparent on Friday when the minister for business, Santi Vila, stepped down, commenting resignedly on Twitter, "My attempts at dialog have failed again." 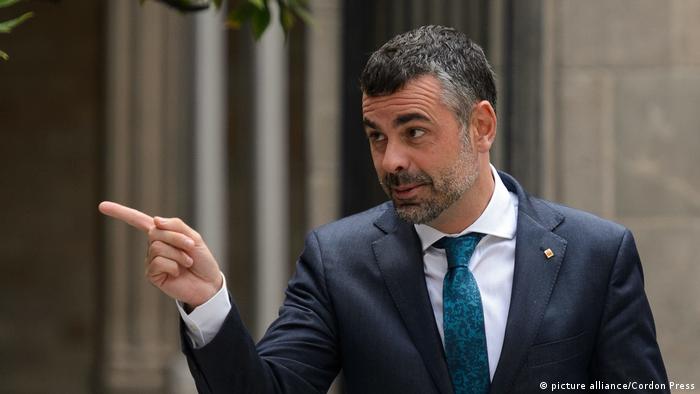 "There's still a split in the pro-independence bloc," the political scientist Oriol Bartomeus said. "It's not as visible anymore right now, but it may reappear in the coming days if there are discussions about whether or not its supporters should take part in the elections on 21 December."

The division reflects the mood on the streets of Barcelona. The initially homogenous independence movement is breaking up into different camps. There are the formerly passionate supporters of independence who've changed their minds in view of the withdrawal of banks and businesses from Catalonia. There are the people who've always wanted Catalonia to have a stronger statute of autonomy, and who voted "yes" in the referendum out of protest.

There are also those Catalans who are the loudest and most visible on the marches and demonstrations: the ones who won't be content with anything less than independence. And now they've had it — if only briefly.

European lawmakers have voted to waive the immunity of the former Catalan leader along with two other separatists MEPs. The move could pave the way for their extradition.