Allowing a vote on re-erecting a statue of "Iron Felix," the father of Russia's secret service, may be more than a symbolic gesture to appease the left in times of hardship, writes Fiona Clark in Moscow. 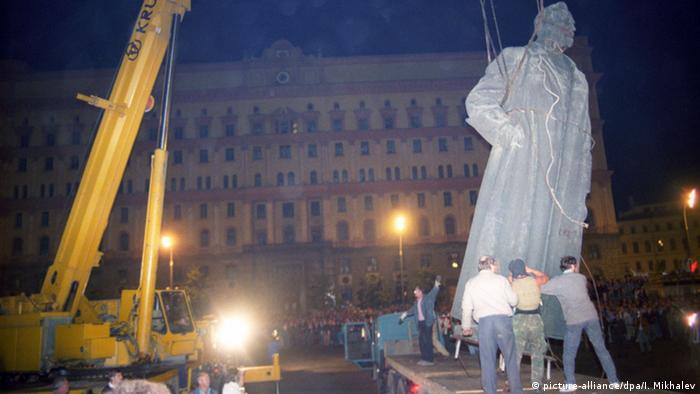 I was there the night Felix Dzerzhinsky's statue was removed from its plinth in the center of Lubyanka Square - which is actually a roundabout - just outside the headquarters of the then KGB.

I watched as Muscovites climbed onto the statue, attached the hook from a crane and pulled it to the ground. "Iron Felix" was dead and so was 75 years of communist oppression at the hands of the secret police he had helped set up and run under Lenin. There was a palpable sense of optimism and euphoria in the air.

Dzerzhinsky, known as the father of Russia's secret police, lead its first incarnation, the Cheka. Estimates of how many people were killed by the Cheka vary from 50,000 to 500,000. It was established in 1917, and not long afterwards Dzerzhinsky oversaw what was known as the "red terror" - a few months in 1918 when perceived enemies of the state were taken away and shot without a trial in order to remove any threat against the communist revolution. In a brief window between September and October that year, it's said that as many as 15,000 so-called enemies of the state were shot within 24 hours of their arrest.

Russia Today, the Kremlin's English language news service, states: "The organization turned into a giant man-killing machine. At Cheka's headquarters in Moscow lights glared every night as hundreds were brought in for interrogations. Here Dzerzhinsky spent days on end, keen to take part in questioning and studying files. He virtually lived in his office, where a bed's [sic] been fitted for him." It goes on to quote a Red Army newspaper as saying: "Let there be floods of blood of the bourgeoisie - more blood, as much as possible." 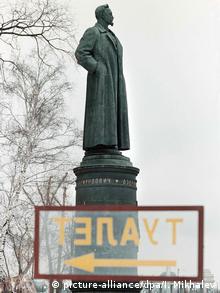 Over the years the communists and various nationalists have called for Dzerzhinsky's reinstatement. Until this week they'd been given a polite nod but not taken too seriously. But in what press reports are saying was an "abrupt change" of heart, they are now allowed to pursue their case for a referendum which would be held in September.

So, what possible reason could there be for not putting him back outside the windows of the KGB's successor, the Federal Bureau of Security of FSB?

Well, there are still a number of Russian's who vividly remember the scars these successive security organizations left on their families. People taken away at night and sent to gulags or shot and buried in mass graves just outside the city.

If you go to Moscow, it's a good idea to do a tour of the area around Lubyanka, where they will show you the buildings where Stalin ‘enemies of the state' were taken to be shot. Usually churches or banks were used because they had solid basements so the sound of the shootings couldn't be heard. The bodies were then taken on trucks to Butovo just outside the city, where they were buried in mass graves.

After Stalin's death the killing rate eased off but the harassment remained. Friends have told me how even in the 1990's, when things were meant to be freer with "Glasnost and Perestroika," they would receive a phone call asking them to come into Lubyanka to meet "Nikita Nikitovich Nikitkin," who would then quiz them on things like "why they had foreign friends."

And these days the intimidation continues in slightly more subtle ways. Prior to an election, the building administrator might knock on the door and ask if you're going to vote and who for, or if you're a student, your university will tell you your services are required at a rally and if you don't go, your grades may be affected. If you run a hospital, you'll be told funding will be cut unless 90 percent of your staff and patients vote for the powers that be. (Yes, the doctors have to get the patients to vote in line as well - no coercion there!)

It's ironic that the establishment of the Cheka prompted the now deceased American journalist George Seldes, who had interviewed Lenin and worked in Russia before being expelled, to write: "Because of [the] Cheka, freedom has ceased to exist in Russia. There is no democracy. It is not wanted."

Does this vote, should it go ahead, now represent the same thing? Has Russia in a short 24 years abandoned all its optimism and come full circle right back to where it was? The slew of recent anti-Western laws and tightening of freedom of freedom of speech would suggest so. In fact, I'd say there was more freedom in 1991 before the collapse of the Soviet Union than there is today.

Seldes also wrote: "The Cheka is … a great success. The terror is in the mind and marrow of the present generation and nothing but generations of freedom and liberty will ever root it out."

Fear still reigns. Unfortunately, there's never really been much time without it - certainly not the generations needed.

As one Russian friend put it this vote "is the end of all hope."

Hundreds of scientists, authors and politicians say Russia has escalated its policy against NGOs in the country. A push to close the well-regarded Levada Center is the most recent blow to Russian civil society. (30.05.2013)