Ireland's bond rating has been cut to non-investment grade by credit rating agency Moody's. Ireland is the third eurozone country to be given the junk status rating after Portugal and Greece. 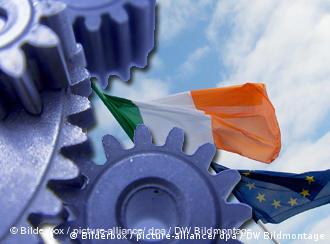 Ireland received an EU and IMF emergency bailout in 2010

The credit rating for Ireland has been lowered to junk status by Moody's rating agency.

Moody's said the decision was based on the "growing possibility" that Ireland would need a second bailout. Ireland received emergency financing from the European Union and International Monetary Fund last year which is due to end in late 2013.

The Irish rating was lowered from Ba1 to Baa3, Moody's said in a statement Tuesday. The decision means Irish government bonds have been branded as non-investment grade.

A spokesman for the Finance Ministry told Irish broadcaster RTE that the downgrading was disappointing, incoherent and out of step with other bond rating agencies.

Ireland had a top triple-A rating two years ago, but a wave of bank bailouts after the country's real estate bubble burst sent the government's debt soaring.

Greece and Portugal have also had their rating cut to junk status. Moody's decision to cut Portugal's rating by four levels on July 5 provoked anger throughout the eurozone.

"We need to examine the possibilities of smashing the rating agency oligopoly," said German Finance Minister Wolfgang Schäuble on Monday. 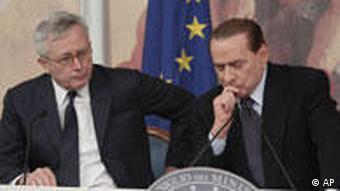 Italy's leaders are scrambling to stop the crisis from spreading

Eurozone leaders are facing mounting pressure to produce a swift and solid response to stop debt contagion from devastating the prime economies of Italy and Spain. The debt crisis has sapped the confidence in the euro on global markets.

The International Monetary Fund on Tuesday urged Italy to be decisive in cutting its deficit, as investors dumped Italian bonds and the country's leaders rushed to pass an austerity plan.

Amid worries that Italy could follow Greece, Portugal and Ireland to require a bailout, the IMF however praised Italy's reform package that has already cut its deficit to 4.5 percent of gross domestic product, down from 5.3 percent two years ago.

"While the economy has strengths, the public debt is high and growth is expected to remain constrained because of long-standing structural bottlenecks," the IMF said.

New IMF head Christine Lagarde welcomed attempts by eurozone countries to shore up stability, but added, "we look forward to the prompt implementation of the important measures outlined."

Ministers have pledged to strengthen the size and scope of a multibillion-euro fund set up in the aftermath of the Greek bailout in May 2010. Eurozone leaders are making plans for a possible crisis summit on Friday.

Germany, however, was reticent about the possibility of an emergency summit. Chancellor Angela Merkel wanted the focus to remain on the second Greek bailout, with work continuing "at full speed."

Opinion: How to fix the eurozone's faulty foundation

If a product is proven to be flawed, it is taken out of production until the problem can be fixed. Deutsche Welle's Rolf Wenkel says that should apply to the eurozone, too. (13.07.2011)

World markets and the euro tumble as Italy stumbles

Prime Minister Silvio Berlusconi has tried to calm fears that Italy could be swept into financial crisis as stock markets fell over worries about Italian debt. But many see Berlusconi as part of the problem. (12.07.2011)