The country has finally dropped its opposition to a global tax reform brokered by the OECD in July. The revised corporate tax rate will only apply to large multinational companies 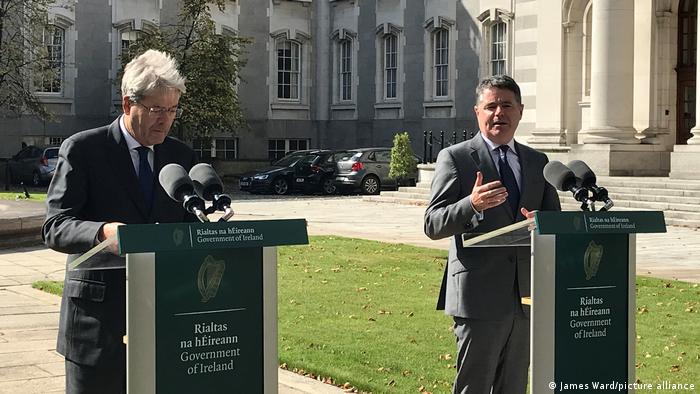 Finance Minister Paschal Donohoe (right) said there would be consequences, but also scope for opportunities

It means Ireland is signing up to a global tax reform for a minimum rate for multinationals. Dublin had held out until now as the country's low tax rates have long attracted companies like Apple and Facebook.

What are the details of the Irish tax reform?

The reform, to be finalized on Friday, will apply to multinationals with an annual turnover of more than $870 million (€750 million).

Smaller businesses will not have to abide by the new tax rates.

"The government has now approved my recommendation that Ireland joins the international consensus," Donohoe announced. "This is the right decision, it is a sensible and pragmatic decision," he added.

The finance minister said he was satisfied with the decision, which came after "detailed discussion." He also said that Ireland's interests would be better served within the agreement and that they had reached a "balanced" and "fair compromise."

Reforms would take effect in 2023. It would affect 56 Irish multinationals that employ 400,000 people.

If Ireland chose to sit out of a global proposal to standardize minimum corporate tax rates at 15% globally, companies that benefitted in Ireland would likely have to pay additional taxes elsewhere.

Why had Ireland resisted plans for global tax reform?

Ireland had opposed the reform when the proposal, brokered by the Paris-based Organization for Economic Co-operation and Development (OECD), was first endorsed by finance ministers of leading economies in July. G20 finance ministers, representing the world's top economies, had supported the plan at their summit in Venice.

That was the first time countries were embarking on new tax rules for multinational companies in a generation, one that would make sure that big companies would pay their fair share in taxes.

One of the main sticking points between Ireland and OECD had to do with the wording of the agreement. Ireland had opposed to the plan because the revised tax rates included "at least" before the 15% rate.

An updated text this week removed "at least," clearing any scope of ambiguity. Ireland said it was an important issue that needed to be resolved, given the "desire of some to seek a higher rate."

Tax 'a chance to end the race to the bottom,' says German finance minister

The US Treasury welcomed the decision as putting the world on a path toward a "generational achievement" to ensure corporations pay their fair share of taxes.

Nearly 140 countries have backed the plan so far. Hungary is now the only EU member yet to supported the reform, though it cannot block the proposed changes.