Iraq′s election campaigns marked by attacks | World | Breaking news and perspectives from around the globe | DW | 20.04.2013

Overshadowed by suicide bombings, Iraq's provincial election campaigns are over. Saturday's elections are seen as a test for Prime Minister al-Maliki, who faces massive criticism from both Sunnis and Shiites. 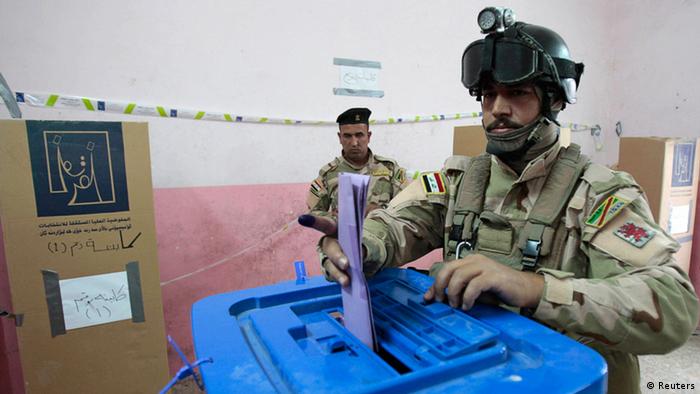 Campaigning for elections in Iraq can be life-threatening. Fourteen candidates running in provincial elections scheduled for Saturday (20.04.2013) have been killed. The number of bombings aimed at security personnel and civilians has risen dramatically of late, with 50 people killed on Monday alone. Al Qaeda supporters wanting to disrupt the elections are presumed to be responsible for the terrorist bombings. Police and soldiers have been permitted to vote one week in advance - to allow them to focus solely on security when the polls open.

Governing council elections are considered a litmus test for Prime Minister Nouri al-Maliki ahead of parliamentary elections in 2014. Recently, tensions between the Sunni minority and the various factions of the Shiite majority have increased. In some of Iraq's provinces, demonstrations against al-Maliki have been going on for months, with people protesting against what they see as an abuse of power. Atheel al-Nujaifi, governorof Iraq's Ninevahprovince, told Deutsche Welle, "Iraq's Sunnis are systematically sidelined by the Shiite government in Baghdad."

Critics charge Shiite leader al-Maliki with having an authoritarian style of government and are warning of a new dictatorship. The 62-year-old prime minister is simultaneously minister of defense and of the interior. Yet Stephan Rosiny, of the Hamburg-based GIGA Institute of Middle East Studies, said "the political landscape is much too fragmented for one single political power to be able to install himself as an authoritarian ruler." Al-Maliki would also have to reach out to other powers as well, the Middle East expert said. 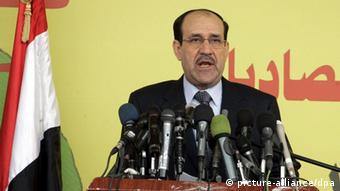 The prime minister also has a host of strong opponents in the Shiite faction, such as cleric Muqtada al-Sadr. The religious figure has declared his solidarity with the "ostracized Sunni brothers." Out of protest against al-Maliki, ministers from al-Sadr's party want to abandon the coalition government.

Elections on Saturday will only partially reflect the political climate in the provinces. Six of the country's 18 provinces will not hold elections at this time. The central government postponed going to the polls for security reasons in the Sunni provinces of Anbar and Ninevah. But demonstrators there wanted the election, reported Martin Kobler, United Nations Special Representative for Iraq. "The security situation is surely not ideal, but it's also not ideal in the entire country," the former German ambassador to Iraq said. He advocated a quick follow-up date for those elections.

Elections are completely out of the question for Kirkuk, where Arabs, Kurds and Turkmens have been fighting for power for years in the oil-rich region. The three Kurdish provinces in northern Iraq normally vote at a later date anyway, with elections scheduled there for September. In the remaining 12 provinces, more than 8,000 candidates are vying for one of the total 378 provincial council seats. As per quota, about one-quarter of the mandates go to women. 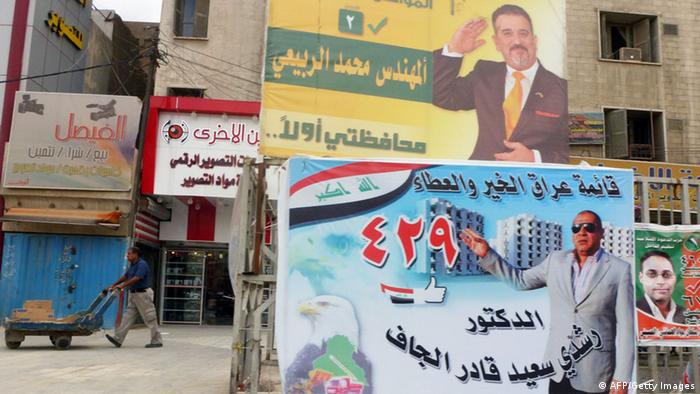 Apart from regional topics such as power outages, bad roads and dilapidated sewer systems, security is a number-one concern among Iraqis, prompting GIGA's Rosiny to speculate that al-Maliki's strong party will lead elections. Voters may feel that a split among votes would lead to a further destabilization of the situation.

GIGA researchers have said political parties in Iraq are not focused on representing solely the interests of one ethnic group or religious denomination. "There's policy behind it," Rosiny said, reflecting on his latest visit to Iraq. Religious questions and concerns of ethnic groups have taken the backseat to political questions. "Politics have become a lot more secular, even though many religious, Islamist parties are in power or assume office," Rosiny said.

Since the provinces are generally dominated by one ethnic group, election campaigns there occur more within communities than between them. Local elections therefore promote a process of internal democratic pluralization of political powers, Rosiny said.

Authorities in Iraq have reported more than 30 deaths in a string of bomb attacks that have shaken the country. The bombings are seen as a troubling sign of what may be in store for next Saturday's provincial elections. (15.04.2013)

US Secretary of State John Kerry has met with Israeli officials at the end of a tour through the Middle East. He has advocated a Middle East peace process that prioritizes progress over speed. (09.04.2013)