Authorities in Iraq have reported more than 30 deaths in a string of bomb attacks that have shaken the country. The bombings are seen as a troubling sign of what may be in store for next Saturday's provincial elections. 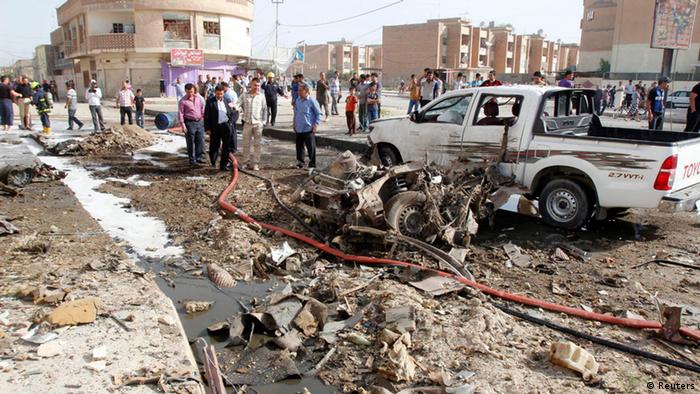 Monday's bombings took place in several places, including Baghdad, Fallujah, and the northern city of Kirkuk (pictured above).

Two of the blasts, which were apparent car bombs, occurred at a checkpoint of the heavily guarded international airport in Baghdad. At least a hundred people were injured as a result of the attacks.

"Two vehicles managed to reach the entrance of Baghdad airport and were left parked there. While we were doing routine searches, the two cars exploded, seconds apart. Two passengers travelling to the airport were killed," a police source told the news agency Reuters.

The April 20 vote for provincial officials will test the ability of Iraqi forces to maintain security following the withdrawal of US combat troops from the country in December 2011.

The ballots will also test Shi'ite Prime Minister Nuri al-Maliki's political muscle against Shi'ite and Sunni rivals ahead of a nationwide parliamentary election due in 2014.

While there were no immediate claims of responsibility for Monday's attacks, similar tactics have been used by al Qaeda insurgents in Iraq in the past.

Increasing cooperation acknowledged recently by al Qaeda in Iraq and the al-Nusra Front in neighboring Syria has heightened security concerns in both countries, which share a common border.

Fourteen election hopefuls have already been murdered in the run-up to next Saturday's vote, Iraq's first sizeable poll since 2010.

On Sunday in the restive province of Diyala north of Baghdad, election candidate Najm Harbi of the secular-leaning Iraqiya list was driving in his car along a highway when a bomb exploded, killing him and three of his brothers, according to police.

More than 8,000 candidates will be standing in the elections, with 378 seats on provincial councils up for grabs. An estimated 16.2 million Iraqis are eligible to vote, among them about 650,000 members of the security forces. Twelve of the country's 18 provinces will take part.

Iraq's Shiite-led government often faces opposition from the country's Sunni minority. Al Qaeda in Iraq, a Sunni terrorist group, has tried to exacerbate the sectarian divide by targeting Shiites in the past.

Although security has markedly improved since the height of Iraq's confessional conflict, 271 people were killed in March, making it the deadliest month since August,

Hundreds of thousands of Shiite Muslims rallied in Baghdad under the scorching midday sun. Powerful Iraqi cleric Moqtada al-Sadr did not make an appearance.