Iraq's Kurdish capital has been flooded by Iraqis driven from their homes for fear of fighting between the Sunni militants of ISIS and the government. But being a refugee is difficult, so some are already heading back. 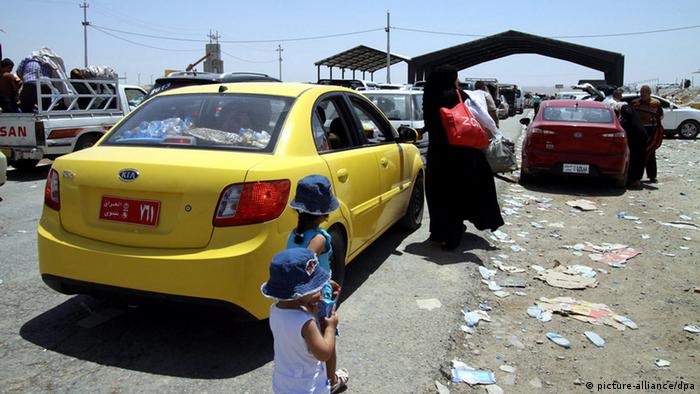 Shar Park, at the center of Iraqi Kurdistan's regional capital, Erbil, is built around a series of small pools and fountains that offer a welcome cool spray on hot summer evenings. Situated at the foot of the ancient Erbil Citadel and across from the main bazaar, it's a popular spot for locals and tourists alike. Starting in the afternoon and lasting until late into the night, merchants lay out prayer beads and small trinkets for sale on the edge of the park, men gather in the surrounding teahouses, and people eat dinner at the busy sidewalk kebab stands.

On a warm Monday night this week, the park was busier than ever, with dozens of families joining the evening crowd.

"You can tell that these people are not from here," says local resident Sardar Mohammed. "Kurdish families don't come here in the evening - they go to other places. Normally at night you just find men here. But people from outside, they're always interested in seeing the citadel and the bazaar."

The presence of so many men, women and children makes for a festive atmosphere but these people are not ordinary tourists - most of them are internally displaced people, or IDPs, fleeing the violence sweeping much of the rest of the country.

As soon as the northern Iraqi city of Mosul fell under the control of militants from the Islamic State of Iraq and Syria (ISIS) last Monday (09.06.2014), city residents started flooding into the nearby Kurdistan region, afraid that the Iraqi government would launch a bombing campaign against the militants.

Even though the government hasn't yet retaliated, in the week since Mosul fell, hundreds of thousands of IDPs have flooded into Kurdistan - about 320,000 from Mosul and an as-yet unconfirmed number from Samarra, Tikrit and other areas that have also been taken over by the militants. Long lines of cars waiting to pass through the Kazir checkpoint between Erbil and Mosul have been a fixture since Monday evening; others have been crossing on foot, carrying small children and overloaded with bags and belongings. 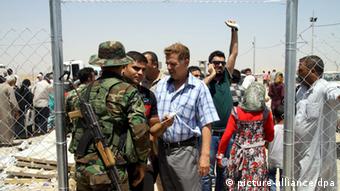 Iraqi Kurdistan is much safer than other areas of the country

One man, who gave his name as Bashar, was waiting patiently at the checkpoint in his white SUV on the second day of the influx, accompanied by his wife and two young children.

"I'm expecting the worst," he explained. "Bombing and other things. My children are afraid - they're scared about everything. Last year, a bomb blast hit our car and my wife's legs were injured, so we're scared."

Some families are heading to the makeshift refugee camps hastily set up by the Kurdistan Regional Government and UNHCR, but many more are staying in hotels or with friends and family members already living in the Kurdistan region.

One family out for a stroll near Shar park on Monday evening had come from Samarra, a town in Salahaddin province that has been the site of bloody battles between ISIS militants and Iraqi forces for several days.

"The situation is very bad in Samarra," the father of the family explained, not wanting to give his name. "There were strikes over the city so we left a few days ago."

With him in Erbil are his mother, aunt, female cousin and eight children, ranging in age from 18 months to nine years old.

Impeccably dressed and well-behaved, the children look as if they're on a special holiday outing, rather than exiles fleeing in fear of their lives. One little girl with heavy bangs and huge brown eyes has a big white flower pinned in her hair, matching her pristine party dress and adding to the sense of occasion. Her mother unwraps chocolates for the children and they wait patiently while their father describes their situation. 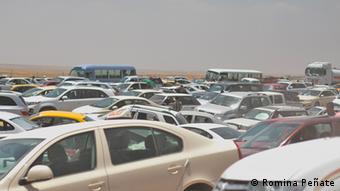 Checkpoints have slowed down refugees' access to the Kurdish region

"People in Erbil have been very kind to us. We are their guests and they have been very hospitable," he says. "I can't afford to rent a house and I have too many children to stay in a hotel, so we're staying with friends."

Despite the free accommodation, he says they will likely have to return to Samarra before long.

"I don't know how long we'll be here but I think I'll have to go back soon. Erbil is very expensive and I'm just a normal worker, a painter. I'm not a government employee, so I don't have a fixed salary. If I don't work, I don't have an income. But I won't take just any job; I have my dignity."

About half of Samarra's population has fled, he says, and those who stayed simply couldn't afford to leave.

In Mosul the fighting has stopped and the UN is cautiously reporting that some families are returning home. People within the city are also reporting that life is slowly getting back to normal, albeit under militant-imposed Sharia, Islamic law. Some even say that things are better now than they were when the Iraqi army was there.

"They have removed all the security blockades in the center of the city so now people can walk freely through the streets," journalist Mohammed Umar Al-Qasi said by phone from his home in Mosul on Saturday. "I took a taxi from the airport area back to my house last night. When the army was here it would take half an hour because I would have to pass through seven checkpoints. Now, it takes five minutes. There were two checkpoints but they just asked me where I'd come from and where I was going and didn't even ask to see my ID."

Samarra, on the other hand, is still the site of active clashes between militants and Iraqi forces. As well as concerns about aerial bombardment by the Iraqi military, much of the city's predominantly Sunni population also fears reprisals from the Shiite militiamen who are converging on the city to support the Iraqi army and to protect the Al-Askari mosque - one of the holiest Shiite shrines in Iraq.

Shiite militia are of great concern to this particular family. "They killed three members of my family," the man's mother explains, wrapping her long shawl tightly around herself. "My husband and 18-year-old son were both taken by the militia in Baghdad two years ago and we've never seen them again." 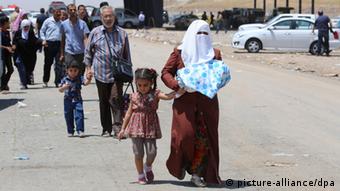 In a horrible coincidence, her daughter was killed in Samarra on the same day, when a rocket struck the building she was in, killing 11 people.

As the conversation turns toward the Shiite militia and possible ISIL control of Samarra, the woman becomes increasingly agitated. "Is this on video? Will it be in Arabic?" she asks, hurrying her son to wrap up the conversation and leave.

"Of course we are scared," he says as he turns to leave, "but we'll stay in Samarra. Where else can we go?"

And with that, he politely says goodnight and ushers his family back toward the park.

Images of ISIS atrocities on the Internet

Pictures of mass execution of Iraqi soldiers by Islamic terrorists have been circulating on the Web. The Iraqi defense ministry has confirmed their authenticity - but questions still remain. (17.06.2014)

The takeover of large parts of Iraq by ISIS has led the US and Iran to mull how they can work together. That is good news, say experts, and hope this can usher in a new level of cooperation between both countries. (16.06.2014)