Iraqi forces have advanced to within a few hundred metres of Mosul and are almost within striking distance of the city. Elite forces are reportedly facing mortar fire as they push into its eastern suburbs. 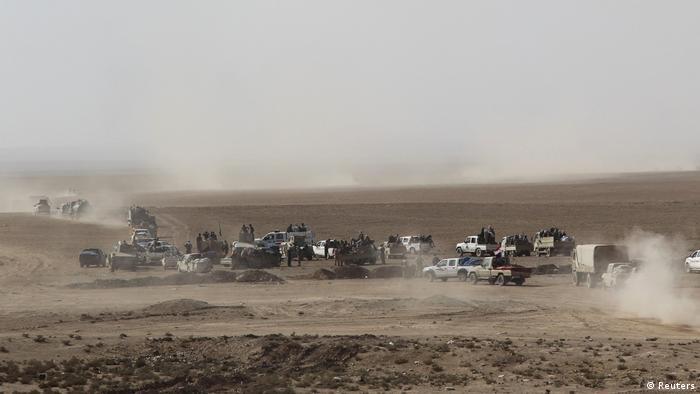 The Counter-Terrorism Service (CTS) has recaptured Bazwaya, one of two IS-held villages between Iraqi forces and the eastern edges of Mosul, Lieutenant Colonel Muntadhar Salem was reported by correspondents of the Agence France-Presse news agency as saying.

"Tonight, if everything is secured, we will be 700 metres (yards) from Mosul," Salem said, denying reports that Iraqi forces had entered the Al-Karama area inside Mosul. "We are still about 2.5 kilometres (1.5 miles) away," he said.

Once the initial phase is over, Iraqi forces are expected to besiege Mosul, try to open safe corridors for the million-plus civilians still believed to live there, and breach the city to take on die-hard jihadists in street battles.

The target is to retake Bazwaya and Gogjali, the last two villages before Mosul," a lieutenant colonel with Iraq's Counter-Terrorism Service (CTS) told the Agence France-Presse (AFP) news agency on Monday.

The battle for the last IS stronghold in northern Iraq has begun. The remaining IS fighters should soon be defeated. But this doesn't mean that jihadism will be eliminated. It could become more threatening than before. (18.10.2016)

'By far the biggest humanitarian disaster in the world'

The German EU parliamentarian Barbara Lochbihler told DW that she expects that the current level of humanitarian aid will not prove sufficient. She said the eventual liberation of Mosul would be no guarantee of peace. (30.10.2016)

Scores of civilians have been executed by the "Islamic State" as the group loses ground, the UN reported. French President Francois Hollande has called for militants to be "destroyed and eradicated everywhere." (25.10.2016)

UN: IS abducts thousands from Mosul to use as human shields

The "Islamic State" has abducted thousands of people in the Iraqi city of Mosul and is using them as human shields. The group has also killed 232 people this week as Iraqi troops close in on the city, the UN reports. (28.10.2016)

The Joint Operations Command coordinating Iraq's war on "Islamic State" (IS) said CTS and army forces had launched a drive "to advance toward the left bank of the city of Mosul from three axes."

AFP described how a coalition aircraft struck a suspected IS mortar position in the distance, while a convoy of Humvees sprayed gunfire toward an industrial area still held by jihadists.

The coalition drive to retake the city began exactly two weeks ago. IS militants captured the city in June 2014 as they seized vast swathes of land in Iraq and neighboring Syria as part of their declaration of a caliphate, a state governed by strict Islamic law.

Last week Iraq's elite counterterrorism unit had paused its advance on the city with a population of 1.5 million to allow forces advancing more slowly on other fronts to close the gap.

Advances have been slower in the south, with government forces still 20 miles (35 kilometers) from the city.

On Sunday, a new player joined the battlefield, as a  coalition of roughly 5,000 Iran-backed Shiite militias - known as Popular Mobilization Forces- headed north towards Mosul in gun trucks and Humvees.

Military officials said they were not headed directly for the IS-held city, but had set their sights on the town of Tal Afar to the west, the retaking of which would help cut supply lines between Mosul and the Syrian border.

Once Iraqi forces, including the Kurdish peshmerga, reach Mosul, they are expected to besiege the city on all sides, attempt to open safe corridors for civilians, and then take on diehard jihadists in street battles.

Local media speculated that the attacks were likely carried out by IS in retaliation for Shiite fighters joining the Mosul offensive.