Iraq: Rival factions struggle for power in parliament | Middle East| News and analysis of events in the Arab world | DW | 04.09.2018

The Iraqi parliament has met for the first time since elections in May. Prime Minister Haider al-Abadi is hoping to form a majority coalition and sideline his rivals, led by former Prime Minister Nouri al-Maliki. 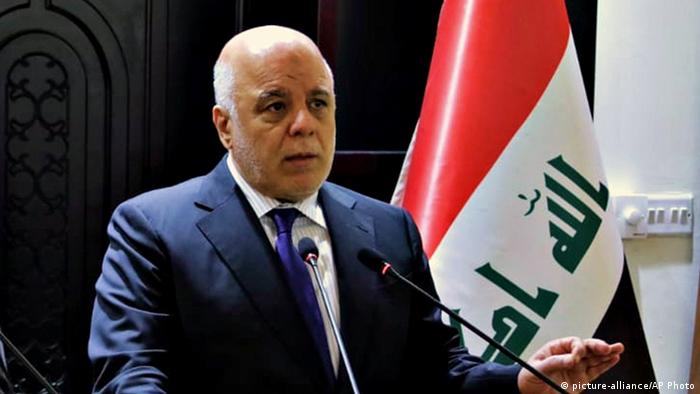 Iraqi lawmakers currently jostling for power to form a majority government have failed to elect a parliamentary speaker, deciding instead to reconvene on September 15.

It was the first meeting of parliament since elections on May 12, in a country plagued by high unemployment, corruption and mass protests due to the lack of basic services and resources, such as water.

Read more: Haider al-Abadi: 'I cannot turn the country upside down in one day'

Current Prime Minister Haider al-Abadi addressed these challenges when he spoke to lawmakers on Monday. "We must focus in the next stage on reconstruction, services, and providing jobs. It is the time for economic reforms and expanding our security achievements," he said.

Al-Abadi is hoping for another term in office, having formed an alliance with Muqtada al-Sadr, a Shia cleric and nationalist leader of the reformist Saairun party.

But now they're competing with a rival bloc backed by al-Abadi's predecessor Nouri al-Maliki, who says his alliance with militia commander Hadi al-Amiri has signatures from 153 lawmakers, having won some support from al-Abadi's bloc. Al-Maliki argued that his bloc now has the stronger position, as al-Abadi's coalition only had signatures of support from party leaders.

Al-Abadi has been seen as the preferred candidate of the United States. Julien Barnes-Dacey, the director of the Middle East program at the European Council on Foreign Relations, told DW that al-Abadi is perceived as less divisive than al-Maliki.

"Al-Abadi has presented himself as someone who has been able to navigate Iraq through the very choppy waters of the last few years, in a manner that is seen as more inclusive and less polarizing than his predecessor Nouri al-Maliki," he said. "Al-Maliki is seen as more sectarian and more closely aligned with the Iranians."

Barnes-Dacey added that when Maliki was prime minister, his policies favoring the Shia majority boosted sectarianism in the country, which helped lead to the rise of the "Islamic State" (IS). IS made Sunni Islam a core aspect of the group's identity, recruiting Sunnis who were disenfranchised by al-Maliki's government.

Negotiations to form a majority government will resume when parliament reconvenes on September 15. But no matter whose bloc succeeds, al-Maliki and al-Abadi both face the task of addressing growing resentment of the political elite among Iraqi citizens.

Since both al-Maliki and al-Abadi have been prime minister, they are both considered to be members of the country's elite. "There has been a widening gap between the elite and the Iraqi citizens," said Renad Mansour, a research fellow at Chatham House. "One of the main reasons behind this emerging gap is that the citizens feel the politicians who have represented them for the last 15 years since the US invasion in 2003 have not done a good job," .

He added that Iraq now has a chance for a fresh start. With IS now driven out of the territory it once held, the next Iraqi government will have to rebuild the country and attempt to move beyond the sectarian Sunni-Shia divide that has defined — often violently — the country's politics in the last 15 years.

"The next parliament is crucial to how these next four years go," Mansour said. "This will be a test of whether Iraq can move beyond the cycle of teetering on the brink of war every few years, or if the country can move into a more positive trajectory."

The US secretary of state is pressing the European Union to economically isolate Iran. Mike Pompeo alleges that the country uses funds to foment instability in the Middle East — and beyond. (12.07.2018)

Pakistan: How has COVID impacted the LGBT community?