Iraqi Kurds have made gains against "Islamic State" militants at a strategic crossing on the Syrian border. Elsewhere, the jihadists are said to have advanced closer to the frontier town of Ayn al-Arab, or Kobani. 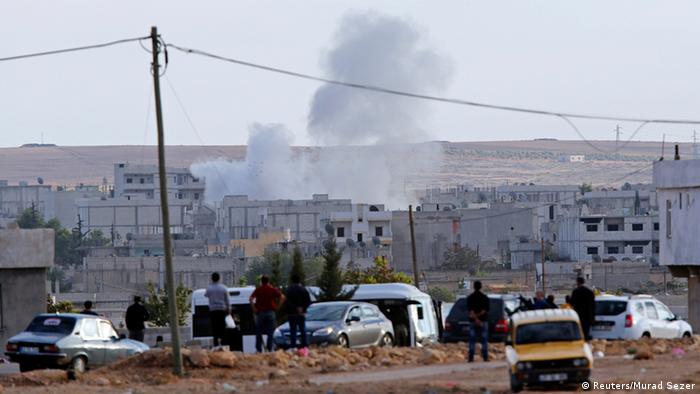 Iraqi Kurds entered the border district of Rabia early Tuesday, engaging in fierce clashes with Islamic State militants. Senior sources in the Kurdish peshmerga told media the fighting is still ongoing, while another said the Kurdish forces have recaptured the crossing.

"We have ousted IS from 30 positions, including in the Zumar and Rabia areas," peshmerga spokesman Halgord Hekmat said.

Rabia lies about 100 kilometers (60 miles) northwest of Mosul, which IS seized in a lightning offensive in early June. Zumar lies near the reservoir of Iraq's largest dam, which has been a key battleground between the Kurds and IS.

The capture of Rabia is seen as crucial, because it would link the Iraqi Kurdish fighters with Syrian Kurds under attack over the border. The ability to cross the frontier freely has been a major strategic advantage for Islamic State fighters on both sides.

US-led forces have been bombing IS targets in Iraq since August, expanding the campaign to Syria last week. IS fighters have swept through Sunni areas in both countries, killing prisoners, chasing out Kurds and ordering Shiites and non-Muslims to convert, or die.

The Islamic State is also threatening to overrun Kobani, a Kurdish town near the Syrian-Turkish border, known by its Arabic name of Ayn al-Arab. Surrounding villages have been under attack by IS since mid-September, with the fighting forcing at least 150,000 Kurds to flee to Turkey.

The British-based, pro-opposition Syrian Observatory for Human Rights says Islamic State fighters have advanced to within two kilometers of Kobani. Kurdish authorities there have appealed for help from the US-led coalition.

The Turkish parliament is due to debate whether to authorize military action in Syria, and join the international coalition against the IS.

The Iraqi Kurds are appearing to claw back land from the jihadists. The Peshmerga secretary general, Jabbar Yawar, says Kurdish forces have retaken around half the territory lost to the Islamic State when the militants surged north towards the regional Irbil in August. That advance helped to prompt the US air strikes.