Three militants stormed the governorate building in the city of Irbil, the normally secure capital of Iraq's northern Kurdish region. The gunmen were eventually killed. 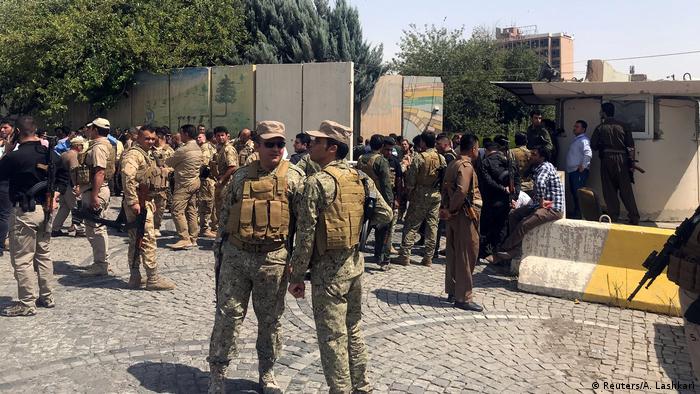 Three gunmen shot their way into the main regional government building in the city of Irbil in northern Iraq on Monday morning before all three were killed by security forces.

One employee was killed and four security force members were injured during a shootout with the militants, who had taken control of the third floor of the governorate building in the capital of Iraq's autonomous Kurdish region.

No group immediately claimed responsibility for the attack, although Kurdish security officials said the attack bore the hallmarks of the militant "Islamic State" (IS) group.

"We believe that the attackers are from Islamic State because of the tactics they used in breaking into the building from the main gate. Two gunmen used pistols to shoot at the guards," a security official was quoted as saying by Reuters.

Irbil, which typically enjoys good security, was the site of a major attack on the US Consulate in 2015. The IS-claimed attack killed three people and wounded five others.

The Iraqi government declared victory over IS in December, although the militant group still holds pockets of territory and continues to carry out attacks.

The Iraqi Kurdish forces known as peshmerga were key in the defeat of IS after the group launched an offensive in 2014, seizing nearly a third of the country.

The German development minister, Gerd Müller, says Germany and Iraq will step up cooperation on the reintegration of Iraqi refugees. He said up to 10,000 Iraqis would be helped to return home. (22.04.2018)