The German development minister, Gerd Müller, says Germany and Iraq will step up cooperation on the reintegration of Iraqi refugees. He said up to 10,000 Iraqis would be helped to return home. 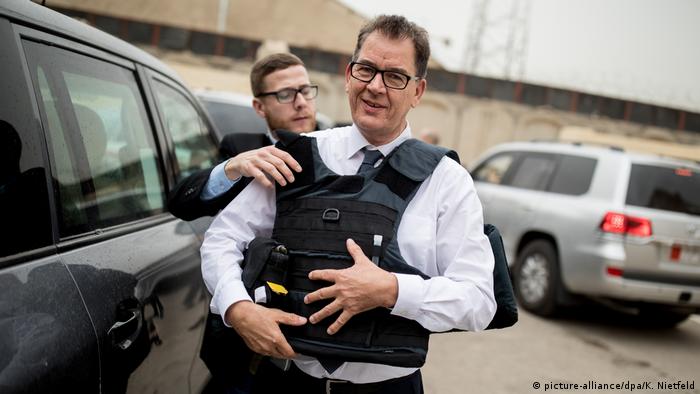 German Development Minister Gerd Müller said on Sunday that Berlin and Baghdad had agreed to work together more closely on helping failed Iraqi asylum-seekers in Germany to return to their native country.

"The aim is to support up to 10,000 Iraqis from Germany in re-establishing themselves and building something new," Müller said, following talks with Iraqi officials in Baghdad.

Müller said Iraqis should have the chance to return to their home country of their own free will and not as "losers." He added that education and employment opportunities would be created in cooperation with Iraqi authorities and companies.

During his visit, Müller opened an advice center for returning refugees in the city of Irbil in the Kurdish-administered northern region of Iraq. Another is planned for Baghdad.

A meeting between Müller and Iraqi Prime Minister Haider al-Abadi was canceled at short notice because of scheduling problems.

Read more:The Iraq War: In the beginning was the lie

Ahead of his departure for Iraq on Saturday, Müller stressed the need to rebuild infrastructure in the country, particularly schools and education facilities, "so that terrorism doesn't regain a foothold."

The German Development Ministry says some 12,000 of the 240,000 Iraqis currently living in Germany are failed asylum-seekers.

Germany is the second-biggest giver of aid to Iraq, having pledged around €1.3 billion ($1.6 billion) in financial assistance since 2014, the ministry says. It has also provided military aid in the form of equipment and training for Iraqi security forces and their allies.

Iraq is beginning to focus on the reconstruction of areas devastated by years of war following the defeat of the extremist "Islamic State" (IS) group in the country announced by al-Abadi late last year.

However, the security situation in the country remains fragile, with a high risk of terrorist attacks across the country.

A double suicide attack on January 15 in Baghdad, which was claimed by IS, killed nearly 40 people, and the group is considered likely to carry out further acts of terrorism despite having lost the territory it once held.