Iran warns US against abandoning nuclear deal as deadline looms 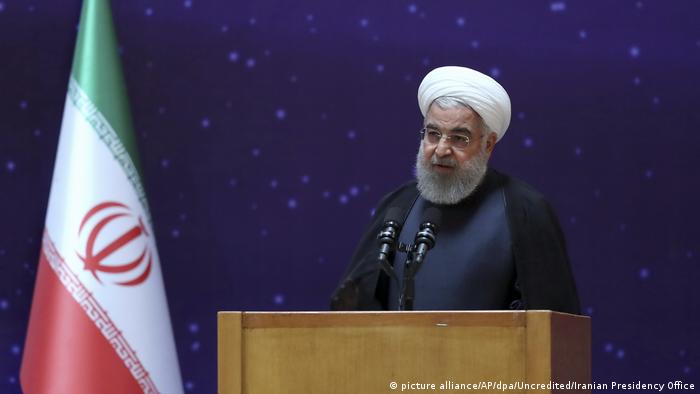 Iran's moderate President Hassan Rouhani warned the US on Sunday against quitting the international nuclear arms treaty with Iran, saying Washington would regret it "like never before."

His comment came less than a week before US President Donald Trump is due to decide whether the US will maintain the accord or withdraw from it.

Iranian president Hassan Rouhani warns US against pulling out of nuclear deal.

French President Emmanuel Macron, in an interview with the weekly German magazine Der Spiegel, urged Trump to stick to the treaty. "We would open the Pandora's box. There could be war."

Israeli Prime Minister Benjamin Netanyahu, who has always been a vociferous opponent of the nuclear deal, also warned his Cabinet Sunday against Iran's military presence in Syria. "We are determined to block Iran's aggression against us even if this means a struggle. Better now than later," he said. "We do not want escalation, but we are prepared for any scenario."

Ratcheting up the rhetoric: Rouhani maintains that Iran is abiding by the accord, has no intention of renegotiating it and that outside the nuclear realm it "will build as many missiles and weapons as needed" for the country's defense.

The treaty: Iran agreed to give up it's nuclear program, and submit to international inspections, in exchange for the lifting of an onerous sanctions regime.

Why is Trump opposed to the deal? Trump's opposition to the deal appears to be partly driven by Netanyahu's hostility towards it. The Israeli prime minister opposes the treaty in no small part because he doesn't trust Iran to maintain its side of the agreement, although UN experts say that so far Tehran is upholding it's commitments.

Who supports the deal? In addition to arms-control experts, who broadly agree that the international oversight over Iran is among the strictest ever negotiated, the pact is also supported by the political leaders of the other five nations — Britain, France, Germany, Russia and China. Even Trump's own defense secretary, Jim Mattis, supports the existing deal.

A critical week: All indications are that Trump intends to withdraw from the treaty in the coming week. Far less clear is what will come next as no clear alternative has been put forth by Trump or Natanyahu.