US Secretary of State Mike Pompeo has announced the details of US sanctions against Iran, including oil exemptions for eight countries. Tehran has said it will continue to sell oil despite the new sanctions. 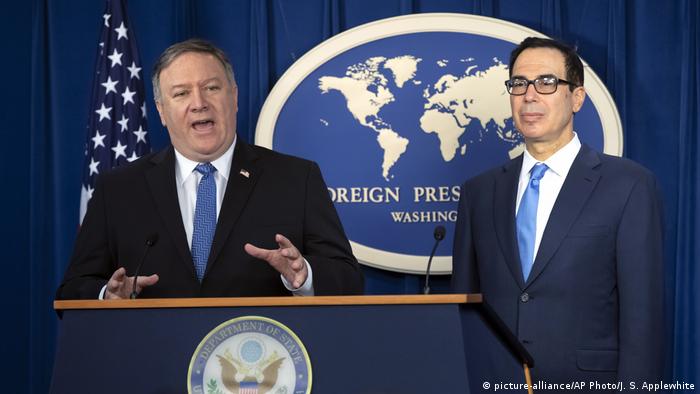 As US sanctions against Iran came back into effect on Monday, US Secretary of State Mike Pompeo revealed that several countries secured oil import exemptions, including: India, China, Taiwan, Japan, South Korea, Turkey, Greece, and Italy.

Iran has said it will defy the reimposition of sanctions, which target the country's oil exports and financial transactions. The US decided to reimpose the sanctions after US President Donald Trump withdrew from the 2015 Iran nuclear deal earlier this year.

Iranian leaders appeared defiant on Monday, saying they are preparing to weather the storm. Iranian President Hassan Rouhani said that his country "will continue to sell our oil," despite the sanctions.

Foreign Minister Javad Zarif described the reimposition of sanctions as "bullying," adding that the move was backfiring against Washington by making it more isolated even among its allies.

The European Union told DW that it remains united in its determination to defend the Joint Comprehensive Plan of Action (JCPOA) in its own security interests and the wider security of the region and the world.

What the sanctions target: Monday's measures completely restore all the US sanctions that were lifted under the Iran nuclear deal. This round specifically targets over 700 Iranian entities and assets including: 50 Iranian banks, Iran Air, as well as numerous people and vessels in the country's shipping sector. The sanctions also come as Iran's economy is under pressure from the first round of US sanctions that went into effect in August.

What is the Iran nuclear deal? In July 2015, international powers and Iran agreed to a deal that called for lifting crippling international sanctions in exchange for Iran dismantling its nuclear program. Known as the Joint Comprehensive Plan of Action (JCPOA), the deal with Iran was signed by the United States, Germany, the United Kingdom, China, Russia, France and the European Union. Trump announced he was pulling his country out of the deal earlier this year.

Trump: 'Iran is a much different country since I terminated that deal'

EU plan to sidestep Iran sanctions: How will it work?

The EU's vow to keep trading with Tehran despite new US sanctions is causing further friction with Washington. The creation of a special purpose ​​vehicle (SPV) will help facilitate payments between Iran and Europe. (26.09.2018)

Donald Trump has pulled the US from the international nuclear accord with Iran without an apparent Plan B. Now the future of the deal without the United States and what comes next is uncertain. (18.05.2018)