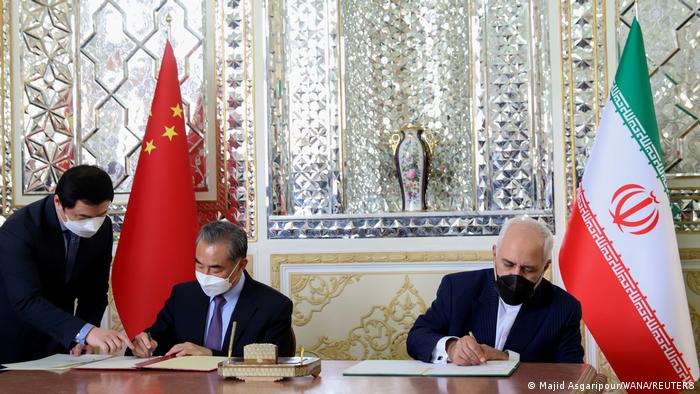 Wang and Zarif signing the "strategic cooperation agreement" in Tehran

Few details of the deal were publicly released as Iranian Foreign Minister Javad Zarif and his Chinese counterpart, Wang Yi, took part in a signing ceremony.

Iranian Foreign Ministry spokesman Saeed Khatibzadeh described it as a "deep, multilayered and fully fledged" pact to deepen trade, economic and transport cooperation that would be "very effective in deepening" relations with China.

Iranian news agencies quoted Wang as saying that ties — forged when bilateral exchanges began 50 years ago — would be "permanent and strategic."

Negotiations for the deal sparked controversy in Iran in 2020. In July, Zarif had assured lawmakers in Iran's Parliament that there was "nothing secret" after ex-President Mahmoud Ahmadinejad alleged that talks on the "new, 25-year" accord were being held without the knowledge of the Iranian people.

Back in 2016, a "reciprocal" road map was agreed in Tehran by Iranian President Hassan Rouhani and Chinese President Xi Jinping, a champion of the Belt and Road initiative to expand continental infrastructure, including rail and ports.

Currently Iran and China do about $20 billion (€16.9 billion) in trade annually.

That's down from $52 billion in 2014, before global oil prices declined and sanctions were imposed on Iran in 2018 by Donald Trump, who pulled the United States out of a six-nation deal to restrain Iran's nuclear ambitions during his time as president.

The goal set in 2016 by China was to boost trade with Iran tenfold to $600 billion within a decade. 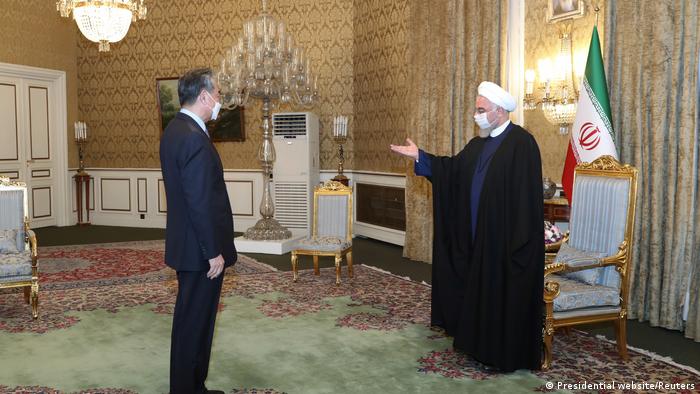 Wang (left) and Rouhani met in Tehran on Saturday

Wang's visit to Tehran comes just days after he hosted Russian Foreign Minister Sergei Lavrov at talks in the Chinese city of Guilin.

Iran, China and Russia have strained relations with Washington after President Joe Biden's new administration vowed to remain firm in its dealings, despite a renewed emphasis on diplomacy.

In 2019, China and Iran took part in a joint naval exercise with Russia in the northern Indian Ocean.

During consultations on Friday, Biden and British Prime Minister Boris Johnson "agreed on the need for Iran to come back into compliance with the nuclear deal," according to a spokesman for Downing Street.

Britain and Germany are also signatories to the nuclear pact with Iran.

Iran and USA: Is a new nuclear deal possible?

Iran's Supreme Leader Ayatollah Ali Khamenei says that Tehran will not stick to key parts of the 2015 nuclear accord until Trump-era sanctions are ditched.