Thousands of people left homeless after a massive earthquake struck western Iran are still without tents, food and water. The quake has led to an outpouring of solidarity in Iran. 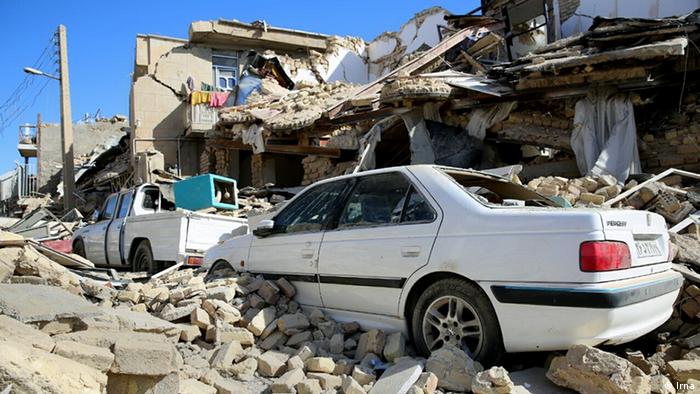 Iranian authorities on Tuesday scrambled to bring relief aid to thousands of people left homeless by an earthquake that killed at least 432 people and injured nearly 5,000 more.

The national rescue service called off most searches for bodies trapped under rubble, saying it was unlikely survivors would be found.

President Hassan Rouhani on Tuesday arrived in Kermanshah province, a mostly Kurdish area hit hardest by the 7.3-magnitude tremor that struck the mountainous border region between Iran and Iraq Sunday.

"Today, all Iranians stand behind Kermanshah, and we will do everything so that people can more quickly forget this tragedy," he said.

As rescue operations wrapped up, the priority was "to provide solutions for heating, housing and food," said Pir Hossein Koolivand, the head of national rescue services.

Read more: Squashed between Arabia and Eurasia - why the ground shakes so often in Iran

Around 15,500 homes were destroyed and another 15,000 damaged in Kermanshah province, according to official estimates.

Many villages consist of homes made of earthen bricks unable to withstand earthquakes. However, some criticized damage to so-called Mehr government constructed housing projects from a decade ago, suggesting they were made using shoddy material and construction techniques.

"Before their 10-year anniversary, Mehr buildings have turned into coffins for their inhabitants," the reformist Fararu news website wrote Monday.

Recognizing the problem, Rouhani said the government would launch an investigation.

"The faults and shortcomings in the construction of these buildings should be investigated," state-run IRNA news agency quoted him as saying. The "government will definitely follow up on these issues and identify the culprits."

In the town of Sarpol-e-Zahab, one of the hardest hit in the quake, thousands of homeless residents sheltered in makeshift tent camps.

Others were preparing to spend a third night sleeping on the streets as night time temperatures were expected to dip to around 3 degrees Celsius (37 Fahrenheit) through the rest of the week.

Some complained of the slow response from the state.

"What we need is a tent and covers to be able to get through the night," said Shima Maryami Kiani, 24, a mother of a three-year-old.

"People in some villages are still in dire need of food, water and shelter," said Faramarz Akbari, the governor of Qasr-e Shirin county in Kermanshah province

Iran's Islamic Revolutionary Guard Corp, its affiliated Basij militia and the army were sent to impacted areas on Sunday.

Iran's Red Crescent has provided emergency shelter to thousands of homeless people. But it said aid supply efforts were being hampered by a lack of water and electricity as well as blocked roads in some areas.

The earthquake has led to an outpouring of solidarity from Iranians across the country and millions more in the diaspora.

"Iran cries with Kermanshah," read a headline printed in Kurdish in a state run newspaper.

Ali Daei, a legend in football and former national team coach, started a campaign to gather food and supplies. Two football teams in Tehran also said they were sending tents and blankets to the area.

On social media, Iranians at home and abroad sought to launch their own initiatives to bring supplies to the affected areas.

Dozens of countries including Arab states, as well as Iran's enemies the US and Israel, extended their sympathies to the Iranian people.

Iranian Foreign Minister Javad Zarif thanked the international community for messages of sympathy and offers of assistance. "For now, we can manage with our own resources. Many thanks for all the offers and we will keep you posted," he wrote.

In neighboring Iraq, at least eight people were killed and several hundred injured.

The area along the border of Iraq and Iran sees frequent seismic activity due to the 1,500 kilometer fault line between the Arabian and Eurasian tectonic plates.

In 2003, some 31,000 people were killed by a catastrophic tremor that struck the Iranian city of Bam.

Tensions between Saudi Arabia, Lebanon and Iran are putting a strain on the entire region, with Israel at risk of being drawn into a war with Hezbollah, as Tania Krämer reports. (13.11.2017)

UK Foreign Secretary Boris Johnson has said sorry for claiming a British-Iranian aid worker Nazanin Zaghari-Ratcliff had been "teaching journalism" in Iran before her arrest. The comments "undermined" release efforts. (13.11.2017)

Iran's climate efforts 'not affected by conflict with US'

The adverse effects of climate change and global warming have been increasingly felt by Iran over the past decade. DW spoke to Iran's COP23 delegation chief Majid Shafie-Pour about actions to mitigate these problems. (14.11.2017)