Iran and Turkey 'agree to stop war in Yemen'

Turkey and Iran have agreed on the need for a political solution to end the conflict in Yemen. Turkish President Erdogan held a meeting with his Iranian counterpart Rouhani in Tehran amid deteriorating bilateral ties. 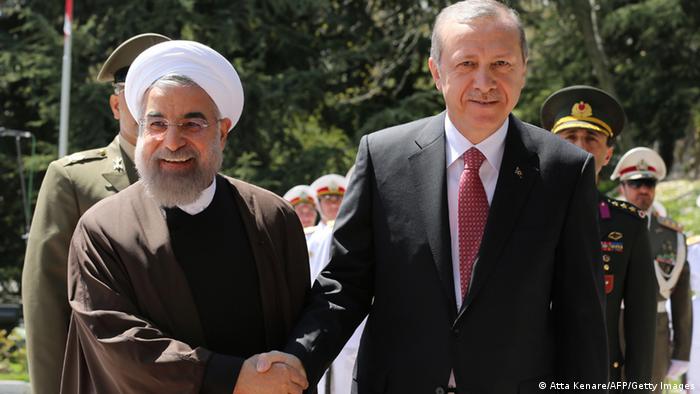 In a joint press conference with visiting Turkish President Recep Tayyip Erdogan on Tuesday, Iranian President Hassan Rouhani said the war in Yemen was high on the agenda during his talks with the Turkish leader.

"We talked about Iraq, Syria, Palestine … We had a long discussion about Yemen. We both think that war and bloodshed must stop in this area immediately, and a complete ceasefire must be established," Rouhani said, adding that the Saudi-led airstrikes in Yemen must halt.

The Iranian president said he hoped that Turkey and Iran could end the Yemen war "with the help of other countries in the region" and bring "peace, stability" to the Middle Eastern country.

Turkey has joined the Saudi-led coalition conducting airstrikes against Shiite Houthi rebels in Yemen, who have captured several key Yemeni cities including the capital Sanaa and the southern port city of Aden.

For his part, Erdogan chose not to comment directly on Yemen's conflict in the press conference, but talked in detail about his country's relations with Iran, and civil wars in Syria and Iraq.

"We have to get united and stop the killing and bloodshed. We have to bring together those who are fighting," the Turkish leader added.

Erdogan, a Sunni who in the past had accused Tehran's Shiite government of trying to dominate the region, downplayed the Sunni-Shiite conflict in the Middle East.

"I don't look at the sect… We have to put an end to this bloodshed, this death," said Erdogan.

Analysts say that despite their geopolitical differences, both Tehran and Ankara are aware of the bilateral trade benefits.

In the past, the two neighboring countries have disputed over the price of natural gas. Turkey, which imports 10 billion cubic meters of Iranian gas per year, took Iran to the International Chamber of Commerce in Switzerland in 2012 after Iran rejected its complaint that the price was too high.

Erdogan said on Tuesday that his country would buy more natural gas from Iran if the Shiite state lowers the rates.

A Saudi-led coalition has continued to launch airstrikes against Yemen's Houthi rebels and allied forces for the second consecutive day. US President Barack Obama has also offered support in the "collective goal." (28.03.2015)