Intersex people put gender binary on trial in Karlsruhe | Germany | News and in-depth reporting from Berlin and beyond | DW | 03.09.2016

Intersex people want Germany's Federal Constitutional Court to officially allow them to use their own gender designations rather than relegating them to "male" or "female." For them, it's about dignity and recognition. 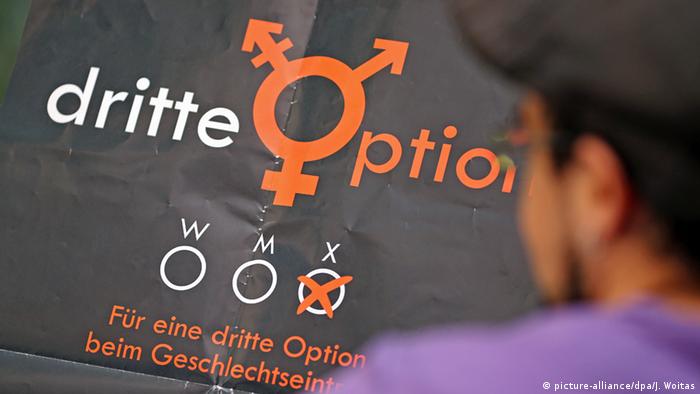 An estimated 80,000 people in Germany identify as intersex, meaning that they don't display the gender traits of people generally described as "male" or "female." Some intersex people have both testicles and ovaries; others do not produce the hormones that determine the common binary gender characteristics. Nevertheless, intersex people - who are often overlooked in broad public discussions of LGBTQI+ equality - are constantly asked which of the two genders they define themselves as and, when out and about, confronted with the tricky practical decision of which clearly marker public toilet to use.

"Always having to make this decision, with only the categories 'man' and 'woman' to choose from, means that intersex people constantly have to deny their own existence," said Moritz Schmidt, of the advocacy group Dritte Option (Third Option), which is seeking a decision on gender designation at the Constitional Court. "They become invisible as people, and this is a violation of the right of personality."

Since 2013, parents have been allowed to define children - and adults to retroactively define themselves - as "male" or "female" on birth paperwork or simply leave the gender slot blank. Dritte Option advocates the possibility of an additional descriptor such as "inter" or "diverse." The topic has made its way to Karlsruhe via a case that has spent two years in the courts.

Vanja, a 26-year-old intersex person from Leipzig, was designated as "female" at birth and initially tried to live as a woman. After undergoing medically necessary hormone treatment, Vanja grew a beard and sought to change the gender on his/her (Vanja's preferred pronoun construction) passport from "female" to "inter/diverse," but the registry office saw no legal basis for a designation other than "male" or "female." One court after another rejected Vanja's plea - including, last month, the Federal Court of Justice, which cited Vanja's option to simply not register a gender. But the mere lack of a gender is not enough for Vanja, whose complaint is that state and society do not accord equal status to intersexuality, robbing intersex people of their individuality and infringing on gender equality.

What a third designation might eventually look like - just the letter X, for example, or a term such as "inter" - is not the most important factor, lawyers say. Keeping gender officially ambiguous can create legal problems for intersex people: Germany, for example, restricts marriage to people of opposite sexes.

In recent years, intersex people have more successfully made their case abroad. In 2014, for example, Australia's high court put an end to gender binaries and added the option of "nonspecific." Similar provisions exist in New Zealand, India, Bangladesh and Pakistan. In Nepal, documentation offers an O for "other." A lawsuit for intersex equality is still being pursued in Austria.

Back in 2012 - two years before Vanja's case began and a year before officials decided that the lack of a gender would suffice - the German Ethics Council recommended the introduction of a third designation, advising that it would take the pressure off of parents and especially doctors, who are often overeager to establish "clarity," a drive that over the years has led to countless gender assignment operations shortly after children's birth - unnecessary interventions that many intersex people are made to live with for the rest of their lives.