Indonesia has 17,000 islands. The Maritime Affairs and Fisheries Ministry is considering renting some of them out to future possible victims of climate change. Many have already started fleeing the islands of the South Pacific, which are at risk of rising sea-levels, and have moved to Australia or New Zealand. 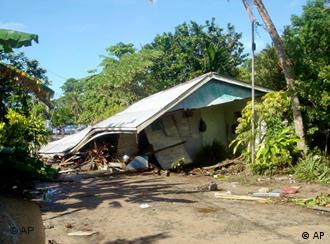 The Solomon Islands, which were badly affected by the 2004 Tsunami, could sink because of climate change

Half of Indonesia’s 17,000 islands are uninhabited. The fisheries ministry therefore thinks it makes sense to offer some of them to people from islands, which are at risk of disappearing -- so-called “climate change refugees”.

Plans are already underway to accommodate people affected by climate change. However, it is not yet clear whether Indonesia will rent out its islands or lend them out for compassionate reasons.

Indonesia’s offer to islanders of the South Pacific comes as researchers predict a huge rise in sea-levels. Until now, there had been estimates the sea would rise by 59 centimetres by the end of the century. But talk is now of 1.10 metres.

John Church from Australia's Commonwealth Scientific and Industrial Research Organisation, or CSIRO, explained: “The most recent records from satellites show since about 1993 show that the rate of rise is more than twice the average than during the 20th century. Sea levels will continue to rise both as a result of warming of the ocean and as water warms it expands and also from an increase in the mass of the ocean.”

Not all inhabitants want to move

Some of the inhabitants of Papua New Guinea’s Carteret Islands have already moved to higher ground -- they are considered the world’s first climate change refugees.

Tuvalu and Kiribati in the South Pacific are expected to completely disappear. The Solomon Islands, which has one million inhabitants, could also go under.

But their inhabitants do not want to move, said Home Minister Fred Fakari: “Maybe other places like Nauru, and maybe the Marshall Islands and Tuvalu and Kiribati may consider that option to find somewhere on those islands in Indonesia but the Solomon Islands would very much like to accommodate within the country."

Other threatened islanders don’t want to leave their homes either. But in the light of the future, Damien Lawson from the international NGO Friends of the Earth says Indonesia’s offer should not be rejected out of hand:

“People in the Maldives, people in Tuvalu und Kiribati don’t want to leave their countries but they want to see in place an alternative if countries like Australia and the other developed countries don’t take the action that is needed by cleaning carbon pollution. So it may seem strange and sometimes even desperate but it’s a reflection of how serious the problem actually is.”

However, one problem is that Indonesia itself is not going to be spared the negative consequences of climate change. By 2050, 2000 of the country’s 17,000 islands are also expected to have disappeared under water.