Indonesia: Loose restrictions could send COVID-19 death toll surging | Asia | An in-depth look at news from across the continent | DW | 10.04.2020

Jakarta recently imposed restrictions on public life to tackle the spread of COVID-19. But a shortage in tests, combined with a lack of enforcement and hazy data figures plague Indonesia's management of the pandemic. 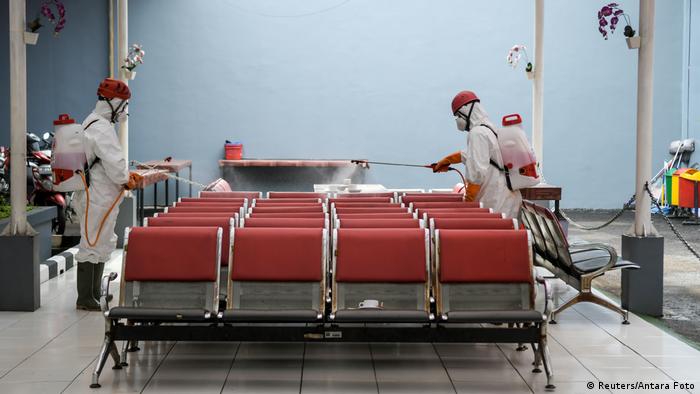 Cisya Satwika was heartbroken after watching a video of health workers in protective suits burying her uncle without any family members standing around his grave. Instead, her family mourned 25 meters (82 feet) away from the burial site. "He lived alone in his house, now he has died alone," Satwika told DW.

Her uncle died in an ambulance on the way to the hospital, after contracting the coronavirus. In the days prior to his death, however, he had been rejected by three hospitals, who said they were at maximum capacity.

Read more: Why does Indonesia have a high COVID-19 mortality rate?

Gynecs Ario also felt the pain of being separated from a dying loved one, when his mother, who died of kidney disease, was buried according to the COVID-19 protocol despite not having died of the virus.

"We took her from Jakarta to Magetan, East Java (643 kilometers from Jakarta). In the beginning, people wouldn’t let us bury her there. Finally, we were only allowed to bury her once we agreed to do so according to the COVID-19 protocol. Only the officers were allowed to bury her, and we had to stand far away from the grave," said Ario.

Although it was painful to stand so far away from the grave, Ario’s family adhered to the burial rules, because, he says, they understood the importance of taking such precautions amid the coronavirus outbreak.

With a death toll of 280 and over 3,200 confirmed cases, Indonesia’s COVID-19 mortality rate is one of the highest in the world.

The capital city, home to almost 10 million people, and its surrounding areas are the most affected by coronavirus, having recorded nearly half of the country’s official tally of infections, according to data from the Coronavirus Disease Mitigation Acceleration Task Force, the Indonesian agency devoted to curbing the spread of the disease.

The number of reported burials in the capital surged by over 60% to nearly 4,400 in March 2020, according to figures from Jakarta’s Park, Forest and Cemetery Department. Last year, the average number of funerals per month was only 2,745.

At the end of March, Jakarta Governor Anies Baswedan voiced his suspicions that the number of victims who had died from coronavirus was much higher than what the government had recorded.

"This means that there may have been some who were not tested and died, while others who have been tested, died before the results of the tests became available," he said.

Indonesia’s low rate of coronavirus testing is likely to be a factor contributing to the high mortality rate, according to Barry Sianturi, a mathematician with the University of Indonesia. Sianturi has also urged the government to increase testing.

"Among researchers, we are pessimistic about the data collected by the government. The number of tests is still too small. At the start, there would be 100 or 200 [tests per day], then there were 1,000, but that figure went down again," he said.

"Other countries, such as the United States, can conduct up to 10,000 coronavirus tests per day, while up to now in Indonesia, less than 15,000 people in total have been tested."

Only 65 out of every million are being tested for coronavirus in Indonesia, according to pandemic data site Worldometer. That means that Indonesia, with a population of 264 million, has one of the lowest rates of testing among countries with a population of 50 million or more. In comparison, South Korea has a testing rate of 9,812 per million people, while Malaysia has a rate of 2,153 and Vietnam a rate of 1,174.

A lack of accurate data

Official mortality rates vary widely across different agencies in Indonesia. The data released by the Jakarta Park, Forest and Cemetery Department differs from the numbers issued by the Central Statistics Agency, for example.

That difference in statistical data poses major obstacles for researchers, according to Sianturi.

"For instance, researchers from other universities also find it difficult to get data on the number of intensive care units or ventilators available in Indonesia. This is either because the data collection is incomplete or has not been shared publicly," he said.

Late in mitigation and action

The lack of testing and hazy data collection are not the only problems plaguing the country’s management of the pandemic, however – the government has also played a role by being slow to react to the virus’ spread.

The governor of Jakarta also criticized the central government’s emergency response in a television interview. "The speed at which we move will determine how many people are infected, how many people must be treated and how many people will die," he told Kompas TV.

Not more than a few hours after Baswedan voiced his criticism, the Indonesian health minister approved the governor’s request to implement contact restrictions across Jakarta province, making it the first region in the country to adopt such measures.

Many of Indonesia’s COVID-19 victims are also healthcare workers, some of whom struggle to convince patients to comply with safety measures. One female doctor at a hospital in Depok, a city just south of Jakarta, said she fell ill with coronavirus after a patient suddenly removed his mask during an examination.

"Sometimes it's very difficult to ask people to be disciplined," the doctor, who wished to remain anonymous, told DW.

Despite having a fever and shortness of breath, she said she still felt lucky compared to her colleagues in other hospitals.

"There are doctors in our hospital who buy their own personal protective equipment and share it with their colleagues. But my brother, who is a doctor in Tangerang, uses plastic to cover the lack of protective clothing," she said.

Even with social distancing measures in place, individual adherence to those measures is a point of concern for researchers, who predict that the peak of the pandemic will occur in June or July. According to Sianturi, the coronavirus curve can only begin to flatten when people start practicing social distancing, and when stricter regulations are implemented.

"Look, even mudik [migrant workers returning to their hometowns before major holidays] is not prohibited. Even though there is a requirement that those who take part in mudik must isolate themselves for 14 days, there is no one who can monitor it," he said.

"In the news, we see that thousands of people have started going back to their home villages to welcome Ramadan. That wave [of movement] has begun. If it is not managed by the government, it can be dangerous."