At least nine people have died in the worst flooding to hit Indonesia's capital since 2013. Power has been cut to suburbs across the city of 30 million to avoid further electrocutions. 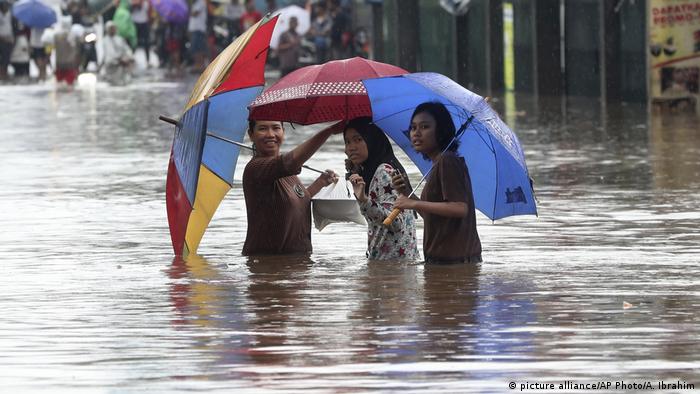 At least nine people died as Jakarta was hit with severe flooding over the New Year.

Torrential rain soaked tens of thousands of revelers as they waited for New Year's Eve fireworks in Indonesia's capital. The rains led to flooding across the city.

Thousands of people were displaced by flooding and a domestic airport was closed after water levels reached up to 3 meters (10 feet) in several places.

Wibobo said some of the deaths were due to hypothermia, but also included a 16-year-old high school student who was electrocuted by a power line.

"My son's body was covered with newspaper when my two other children passed by," the teenager's father told AFP news agency.

Indonesia's state electricity utility said it had switched off power to hundreds of districts to prevent further electrocutions.

Authorities have deployed about 120,000 rescuers to help evacuate those affected and install mobile water pumps. Further flooding is expected with downpours forecast for the coming day.

Read more: After the Indonesian tsunami: Cashing in on the dead

Jakarta Governor Anies Baswedan told reporters his administration would push ahead with infrastructure projects on two major rivers, including a dam and a sluice, to prevent flooding in the city of 30 million people.

This was the worst flooding since 2013 when dozens of people were killed in monsoon rains.

Ceremonies have been held in Indonesia, Thailand, India, Sri Lanka and elsewhere for the victims of one of history's deadliest disasters. More than 230,000 people were killed across a string of Indian Ocean nations. (26.12.2019)