Fatal floods have paralyzed the Indonesian capital, Jakarta, with much of the city underwater. Authorities are working on an evacuation program that could affect up to 100,000 people. 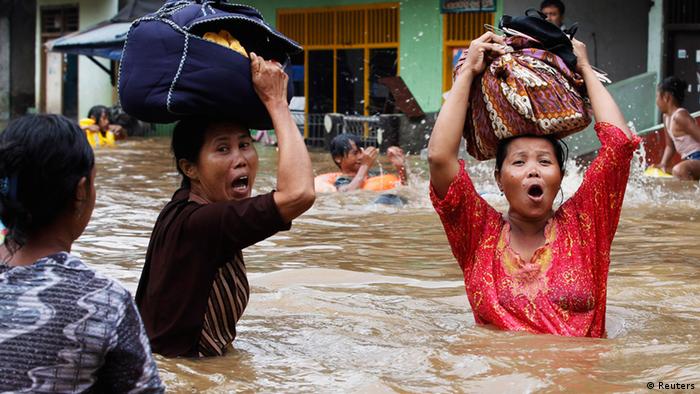 Torrential monsoon rains put up large swathes of the capital underwater, with the downpour expected to worsen.

Officials were looking to move almost 100,000 people to emergency accommodation after their homes were inundated.

"Our map shows that about 50 percent of Jakarta is under water, ranging from 25 centimeters to 4 meters," said Johan Freddy, an official at the National Disaster Management Agency.

While many of those whose homes were flooded insisted upon staying, fearing their possessions would be stolen, Freddy said that more than 10,000 people had been moved to temporary shelters. At least two people have been reported dead in the flooding.

More than 100 millimeters (12 inches) of rain was estimated to have fallen overnight in Jakarta. Traffic on the city's highways - overcrowded at the best of times - was at a standstill, with many businesses and government offices closed.

"For the next two or three days it is estimated that there may be increasing activity of the Asian Monsoon which could increase weather activity in southern Sumatra and Java," said Soepriyo, an official at the Meteorological, Climatological and Geophysical Agency, who like many Indonesians uses only one name.

The city, 40 percent of which lies below sea level, is prone to flooding during the monsoon season.