Witch hunting is usually associated with the Middle Ages, but in some parts of India women still fall prey to the practice. Several Indian states have introduced laws to prevent it, but activists say they are inadequate. 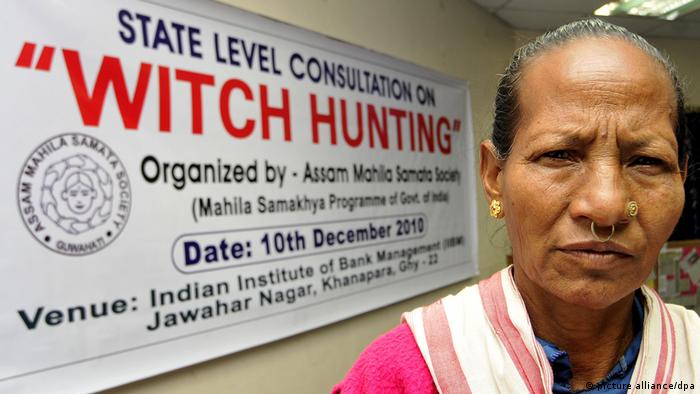 Earlier this week, four elderly people, including two women, were lynched by a mob in the village of Siskari in the eastern Indian state of Jharkhand. The victims, all above 60 years of age, were dragged out of their homes and beaten to death by masked men wielding sticks. Eight of the attackers were subsequently arrested by police, according to local media.

Investigations by police revealed that the murders were pre-planned. Speaking to the Pioneer, an English-language daily, a local police officer said that members of the village, which is mostly inhabited by indigenous tribes or adivasis, had been plotting an attack on the four victims, whose suspected use of "black magic" had resulted in the death of a village resident some time ago.

According to police data published by the Times of India newspaper, some 123 people were killed by mobs in Jharkhand between May 2016 and 2019. These people, mostly women, were accused of practicing sorcery. Across the country, 134 people were killed for the alleged use of "black magic" in 2016, according to the National Crime Records Bureau.

Jharkhand topped the list with 27 deaths in 2016, although activists say the actual number of witchcraft-related attacks could be much higher as many cases go unreported. Also, in several cases, attacks and other punitive actions by community members are not documented.

Witchcraft and witch hunting in India

In ancient times, witchcraft or "demonology" was a practice sanctioned by Hindu scriptures, according to the book, Witchcraft: A study in Indian occultism, published in 1981 by RN Saletore. Witchcraft was also mentioned as a profession in the Rig Veda, an ancient Hindu scripture, and was taught at ancient Indian universities.

The idea or the construction of the "witch" as a concept emerged in the mid-1800s, when ethnology and anthropology began emerging as scientific disciplines undertaken by colonial researchers and officers, Shashank Shekhar Sinha, an author and expert on local cultures, told DW.

A law penalizing witch hunting was passed in the mid-1800, but many in India resisted it. They thought the law was preventing them from punishing wrong-doers.

Today, witchcraft exists in several forms and is believed to be used for causing harm or even something beneficial.

Although modernization and access to better health and sanitation facilities have changed people's beliefs in these ancient practices, superstition still prevails, particularly among the underprivileged communities.

Sinha says the number of witch hunting cases has risen since the 1980s. "This has to do with the politics of development," he said, explaining that Jharkhand, with its large indigenous tribal community and a rich store of ores and minerals "pays the price of development.

Life in a matrilineal society

People who migrate from the rest of the country are taking up jobs in the area, while members of tribal communities are unable to survive in the employment market. In this case, a "witch" becomes a scapegoat for all their problems, Sinha underlined, adding that in several cases, communities have tried to look for scapegoats to propitiate evil spirits when a member of their family falls ill or dies.

Land grabbing and property disputes are also key reasons why villagers often use witchcraft as an excuse to attack women in their community. According to a report by FirstPost, an Indian news website, a local land dealer in Jharkhand's Namkom district spread rumors about a woman being a witch because he wanted to take over her property. Activists also told reporters that women accused of being "witches" are often widows living alone in their property.

"Women cannot possess land under traditional laws, but they have residence rights. But an unmarried woman or a widow has access to the land and the produce of the land," the expert said, adding that in such cases violence against a woman accused of being a "witch" is mostly perpetrated by the victim's relatives.

An alleged "witch" is now often targeted by a mob, like in the recent case of four elderly people in Jharkhand. These people could also be banished by their communities and in severe cases, raped, paraded naked in public, fed human excreta or animal blood to purify them or subjected to other kinds of torture.

Individual states have introduced legislation that tries to address crimes related to witchcraft and witch hunting. In 1999, for example, the eastern Indian state of Bihar introduced the Prevention of Witch (Daain) Practices Act, which was later adopted by the neighboring state of Jharkhand as the Prevention of Witch-hunting (Dayan Pratha) Act. The central Indian state of Chhattisgarh adopted the Witchcraft Atrocities Prevention Act in 2005. Other states, including Maharashtra, Assam and Odisha have recently adopted similar laws to address cases of witchcraft-related persecution in their regions.

In the past few years, however, rights groups have campaigned for a nationwide law to address these crimes. They argue that the witchcraft laws must include offences like sexual violence and public humiliation, which place a premium on women's sexuality and also target members of lower castes and other minority communities like Muslims.

"The current approach has been very piecemeal, where you only talk about the legal aspect of the problem. The laws are inadequate in covering the entire range of crimes associated with witch hunting," said Sinha.

A new approach, according to Sinha, must be "multi-layered and integrative." First, one needs to create awareness among local people; second, a legislative framework is needed to tackle the problem; third, the victims must have access to medical intervention; and finally, they must have access to rehabilitation in their communities and support to process their trauma.