India's space agency has launched its second lunar mission, a week after an earlier effort had to be called off. Scientists hope to make a soft landing on the moon's unexplored south pole. 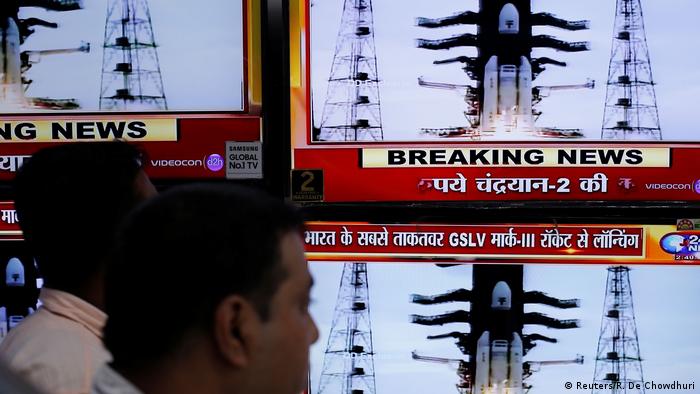 A rocket carrrying the the Chandrayaan-2 "Moon Vehicle" spacecraft blasted off for the moon at 2.43 p.m. local time (0913 UTC) on Monday.

The Indian Space Research Organization (ISRO) rescheduled the launch after a "technical snag," believed refer to a helium leak, a week earlier.

India's aim is to become the fourth country after the US, Russia and China, to land a spacecraft on the moon.

Scientists at mission control center burst into applause as the rocket lifted off into clear skies.

Aboard the rocket is an orbiter that will circle the moon for about a year taking surface images, and a landing vessel carrying a lunar rover named Vikram.

Blast-off from the island of Sriharikota, some 60 kilometers (37 miles) north of the southern city of Chennai, appeared to go without a hitch this time around.

"Every Indian is immensely proud today!," tweeted Prime Minister Narendra Modi. "Special moments that will be etched in the annals of our glorious history!"

ISRO chief K. Sivan told The Hindu newspaper on Sunday that there was "no chance for any technical fault to arise now."

"When the technical fault happened, we stopped the countdown, identified the issue, and rectified it."

India's first lunar mission took place in 2008, when an orbiter scanned the surface with radar looking for signs of water.

The country also aims to land a probe on Mars, having already become only the fourth nation to put a satellite into orbit around the planet.

Space fans can learn all about the moon, Mars and NASA at a three-day event in the US capital. Whether you want to know about satellite imaging or be run over by a Mars rover — it's all there! (19.07.2019)

On July 20, it will be 50 years since Neil Armstrong became the first man to walk on the moon. Soon others could follow — even tourists. Comfort might be low, but the experience would be truly stellar. (18.07.2019)