India’s top court has dismissed calls for an investigation into a fighter jet deal with French firm Dassault. Prime Minister Narendra Modi has faced accusations of corruption over the deal. 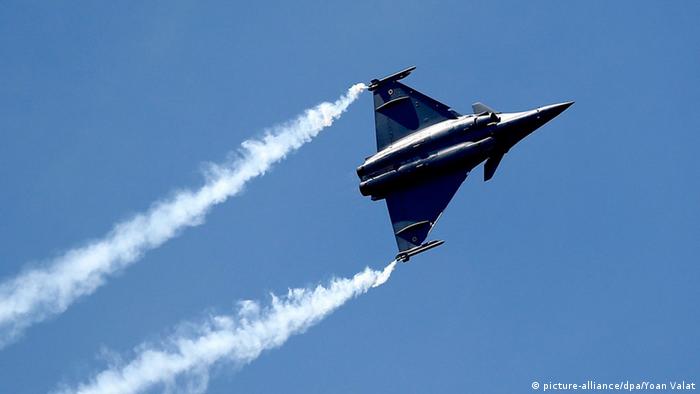 India's Supreme Court on Friday rejected petitions calling for an investigation into a fighter plane contract worth an estimated $8.7 billion (roughly €7.6 billion), amid accusations of financial irregularities.

The court heard a series of petitions that questioned the deal involving 36 Rafale jets, finalized in 2016. The arrangement attracted controversy over its spiraling price tag — and the suspicion that officials granted favors to an Indian partner company.

However, the New Delhi court ruled that it was not in a position to decide on the matter.

"We can't sit in judgment over the wisdom of purchase of aircraft," the judges said, ruling that it was "not the job of this court to go into differential pricing details, which must be kept confidential."

The ruling is likely to come as a relief to the Indian government, which has been under increasing political pressure over the deal.

India's opposition Congress party, along with anti-corruption activists had questioned the inflated price, as well as the decision to pick billionaire Anil Ambani's Reliance Defence as Dassault's domestic partner in India.

Reliance — a company with no aeronautical expertise — secured the contract ahead of state-run Hindustan Aeronautics, which has a long history of making planes.

Critics have alleged that Prime Minister Narendra Modi was personally involved with forcing Dassault to choose Reliance. Congress party leader Rahul Gandhi has claimed Modi was involved "in a clear case of corruption."

Gandhi's comments came after former French President Francois Hollande, who was in office at the time of the deal, said the Indian government had exerted pressure to ensure Reliance was chosen.

The Indian government has denied any wrongdoing and says Dassault was responsible for its own choice of its partner.

Under India's military procurement rules, foreign companies must "offset" or reinvest up to half the total value of a deal with Indian firms, in an effort to build the country's manufacturing base.

High fuel prices, fare wars and a depreciating rupee are making it difficult for Indian airlines to stay aloft. Despite increased passenger numbers, observers say operating models have to change. (29.08.2018)

The sale of the state-owned airline was one of Prime Minister Narendra Modi's big priorities, but now has had to be postponed indefinitely after no bidders came forward to buy the debt-laden company. (20.06.2018)