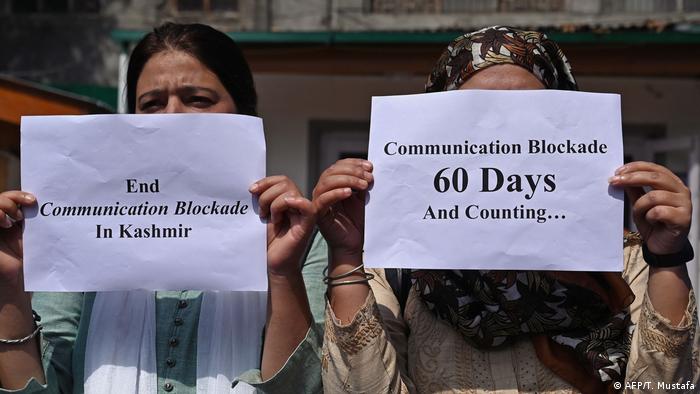 India's Supreme Court announced Friday that an indefinite blackout of the internet in Indian-controlled Kashmir is illegal and constitutes an abuse of power, ordering authorities to review all restrictions in the disputed territory within a week.

The court said the internet shutdown curbs the freedom of the press, an important component of freedom of speech and expression, adding that the shutdown also violated India's telecom rules.

"This sheds light on the rationale behind internet shutdowns which then can be challenged as being constitutional or proportionate or not," said Nikhil Pahwa, digital rights activist and editor of New Delhi's MediaNama.

"So if the state is forced to be transparent, they will be more accountable," he added.

The blackout in Kashmir has been in place for more than 150 days and is the longest in any democracy, according to digital rights group Access Now.

Ghulam Nabi Azad, a leader of the opposition Congress party, and Anuradha Bhasin, editor of The Kashmir Times, were the main advocates in Friday's case. They rebuked Prime Minister Narendra Modi's Hindu nationalist-led government for severing communications in Kashmir after it revoked the Muslim-majority region's semi-autonomous status in August last year.

Modi's government said the shutdown in Kashmir is necessary to maintain order in the region, which has seen violent clashes between security forces and a separatist insurgency backed by neighbouring Pakistan.

Authorities defend the blackout which they claim helps prevent the breakout of violent mass protests against India's decision to withdraw Kashmir's special status.

Last month, authorities enforced an internet clampdown in parts of the Kashmiri capital as well as in parts of India's eastern state of Assam and Uttar Pradesh in the north, due to protests against a controversial new citizenship law that Muslims perceive as discriminatory.

India's Home Ministry and Department of Telecommunications did not immediately comment on the court's decision.