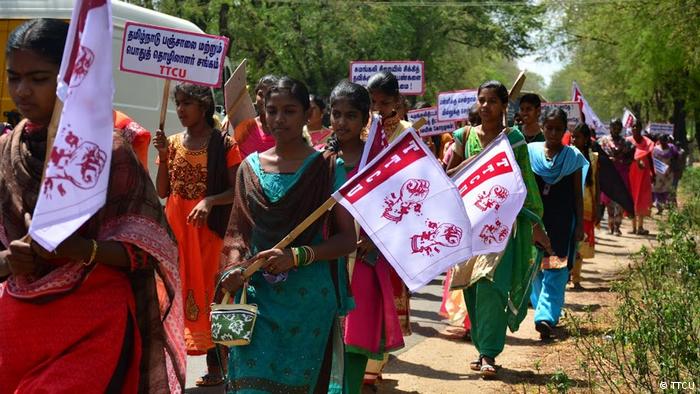 Global retail behemoths, including Walmart and H&M, are being accused of turning a blind eye to the plight of garment workers in India's 'textile valley' after a spate of deaths in factories and hostels blamed on grueling and abusive working conditions.

Human rights groups say the global retailers are yet to fulfill their promises to improve working conditions that they made after the Rana Plaza tragedy in neighboring Bangladesh that killed more than 1,100 workers, exposing dangerous labor conditions.

Garment workers in India and other countries, where the retailing giants benefit from an inexpensive workforce, continue to be coerced into working long hours at a fraction of minimum wages and endure sexual and verbal abuse.

"Global brands are not even asking tough questions from their suppliers to avoid unnecessary attention from international media," Karrupusamy Raman, director of READ, a charity that works with textile workers in the region, told DW. "In fact, they do not even know all their suppliers let alone the torturous work condition prevalent at their factories."

More than 100 workers have died in the past four years in Tamil Nadu, many in suspected suicides. The deaths expose the dark underbelly of India's textile industry, one of the largest contributors to the country's exports, accounting for nearly 13 percent of the goods shipped.

Most of those working in the textile hub spread across Dindigul, Erode, Tirupur and Coimbatore districts are adolescent girls living in hostels far from home.

The girls, a majority of them from marginalized families, are often lured by dubious employment agents into signing "shady and secretive" job agreements, which activists say are akin to bonded labor.

One such agreement is the controversial "Sumangali [a married woman] Thittam" scheme. Under the scheme, mill owners promise to pay a lump sum payment ranging from 30,000 rupees (€374, $439) to 100,000 rupees at the end of the contractual period, typically 3 to 6 years.

"The money is often used towards paying the dowry of the girl at the time of her marriage. The offer is so attractive to the girl and her family that they readily take the bait," Thivya Rakini Sesuraj, the president of the Tamil Nadu Textile and Common Labor Union (TTCU), told DW.

The mill owners ask the family members to keep the deal secret because of the backlash the scheme faces, Sesuraj said.

Once on board, the girls are crammed in hostels, many of them illegal, with restricted freedom of movement. They are denied most statutory benefits and are paid 150-250 rupees per day, way below the minimum wage.

The girls, who Sesuraj refers to as "camp coolies," are forced to slog for more than 12 hours a day, even when they are menstruating. Toilet breaks are frowned upon.

"Let's accept it; women in many parts of India are still treated like second-class citizens," Raman said. "Nearly 99 percent of the supervisors in these factories are men. They harass the girls by calling them names. They physically abuse them and in some cases even sexually."

In February, a 14-year-old girl committed suicide, allegedly because she was forced to work double shifts. Two months later, a 17-year-old spinning mill worker died in her hostel room. Her family suspects she was raped and murdered. 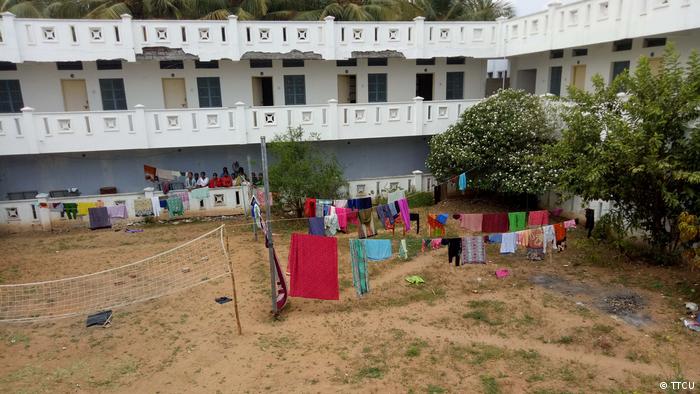 "It's frustrating that there is no thorough investigation in these cases," Sesuraj said. "We have recorded 11 deaths in the region this year but in only four of those cases an FIR [First Information Report] has been filed with the police."

K. Venkatachalam of the Tamil Nadu Spinning Mills Association, which represents more than 650 mills, told DW that reports of excessive work pressure in the industry are "exaggerated."

"It is only a few vested interest groups who are continuously making this allegation," he said in an email reply. "I am totally denying the allegation of such a system prevailing in the textile industry."

Venkatachalam said the stress witnessed by the girls is often "due to family reasons" and not job-related.

But local administrations are now waking up to the problem. In a first of its kind effort, the Dindigul administration plans to run sensitization workshops to improve working conditions in up to 200 spinning mills, Thomson Reuters Foundation reported in May.

Swedish fast fashion giant H&M, which sources 80 percent of its product from Asia, told DW that it extensively monitors the working conditions in the spinning mills which supply their contractors in India.

H&M and other retailers such as Primark and C&A, have faced mounting regulatory and consumer pressure to improve the safety of the workers right through to the end of their supply chain. They are accused of outsourcing their guilt by suggesting they are not responsible for the working conditions at the spinning mills, with which they do not have direct commercial relationships.

"We don't accept any violations of these human rights anywhere in our supply chain, such as the right to be free from slavery, servitude or forced labor and the right to freedom of movement," H&M spokesman Inigo Saenz Maestre said, adding that the company was a part of Ethical Trade Initiative to address working conditions in the spinning mills.

A Walmart spokeswoman told DW that the allegations were "concerning and not what we stand for as a company."

"Our suppliers are responsible for bringing us products made in the right way, and we have standards for suppliers that outline our expectations to which we hold our suppliers accountable throughout their supply chains," Walmart spokeswoman Marilee McInnis said.

A spokesman for Dublin-based cut-price fashion chain Primark said that the company was aware of the issues plaguing the sector.

"We accept that we have a responsibility to improve employment conditions in the region and we have been working with other international brands, NGOs and worker rights organizations to do this," he said.

Primark, which is also a part of the Ethical Trade Initiative, is piloting a program that involves among other things counselling sessions for workers and establishing hostel welfare committees with elected representatives.

German clothing retailer C&A told DW that it has mapped its entire supply chain and has made it available to the public to ensure transparency.

"Nevertheless, we acknowledge that our means of control are limited while at the same time we are committed to an ever stricter process of checks, regulations and — in close collaboration with stakeholders — improvements of working conditions," C&A spokesman Thorsten Rolfes said.

The collapse of the Rana Plaza garment factory in Bangladesh that killed more than 1,100 workers was a wake-up call to the industry. Four years after the disaster, has anything changed in the fashion world? (24.04.2017)

Five years after the biggest industrial disaster in Bangladesh’s history, no relief seems to be in sight for the thousands of survivors who are suffering from severe physical and psychological trauma. (24.04.2018)