The Indian government has pulled a 12-percent tax on sanitary pads for women after widespread protest. Among other things, critics pointed to the apparent contradiction of a tax on menstrual products but not on condoms. 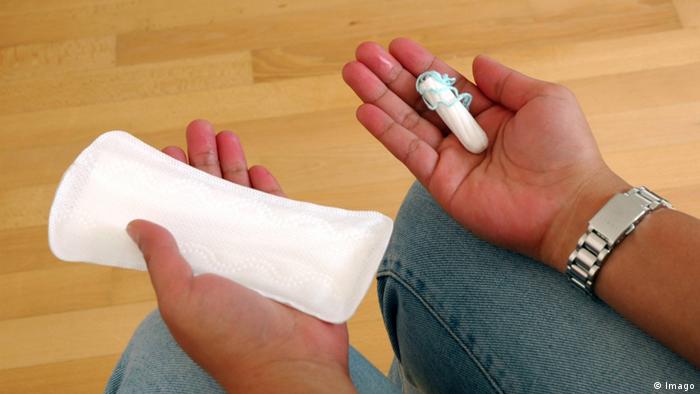 India has announced that it has withdrawn a controversial tax on sanitary pads.

The move is part of a bigger package of cuts to India's Goods and Services Tax (GST). Around 90 consumer items, many of them popular with urban middle-class voters, will be impacted by the tax cut.

"I think all women will be happy to know that sanitary pads will now have 100-percent exemption. There will be no GST on sanitary pads," India's Acting Finance Minister Piyush Goyal told journalists Saturday.

Campaigners had seized on this issue because a lack of access to sanitary pads often forces girls to stay home during their periods. Missing school every month becomes a significant drag on girls' education that ultimately hampers their job prospects as adults.

Sanitary pads were taxed at 12 percent under the GST, which was launched a year ago.

A national survey earlier this year found that about 60 percent of women between the ages of 16 and 24 didn't have access to tampons. In some poorer areas of central and eastern India the figure was as high as 80 percent.

The 77% Report: Periods no barrier to girls'

Other reports in recent years have linked a lack of basic infrastructure such as toilets in government schools in suburban and rural areas, as well as a lack of access to sanitary pads, with higher dropout rates among girls.

"One of those days when a news brings tears of joy as a cause close to ur heart gets fulfilled," Akshay Kumar, one of Bollywood's most popular stars, wrote on Twitter.

"Thank you ... for understanding the need for menstrual hygiene and exempting sanitary pads from tax. I'm sure crores (tens of millions) of women in our country are silently sending gratitude ur way," he added.

Kumar was the lead actor in a Bollywood film, Padman, released earlier this year, which is about an activist who created a line of low-cost tampons for rural India.

Prime Minister Narendra Modi introduced the GST last July in what was the country's biggest tax overhaul in a generation.

It was intended to unify India's economy into a single market, with four tax rates of 5, 12, 18 and 28 percent.

But the tax sparked protests, petitions and lawsuits that questioned why the government would tax sanitary pads and tampons as luxury goods rather than an essential item, such as condoms, which are tax-free.

"This was a most-awaited and necessary step to help girls and women to stay in school, their jobs, to practice proper menstrual hygiene," said Surbhi Singh, founder of Sachhi Saheli, a charity that raises awareness on menstrual health. "This will help them to grow, to show their true potential."