Protests over the past week have forced India's central government to overturn a Supreme Court ruling banning traditional bull-wrestling. People in Tamil Nadu said the ban showed a lack of respect for their culture. 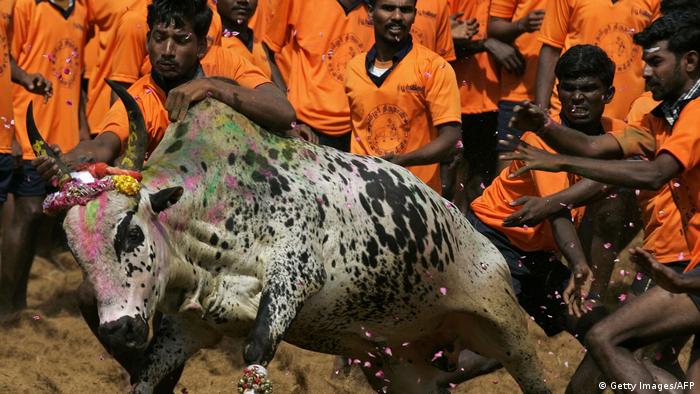 A popular bull-wresting festival in India's Tamil Nadu state is to go ahead after the state and central government moved to temporarily overturn a ban on it.

People in Tamil Nadu have been bull-wresting for centuries as part of their culture and traditions surrounding the Pongal harvest festival, which was held last week.

India's Supreme Court banned the sport known as "Jallikattu" in 2014 in response to a petition by animal rights activists, who argue the practice of giving the animals alcohol and throwing chili powder in their eyes amounted to cruelty toward animals.

During the festival, bulls charge down a road and are let into an open field, where young men try to subdue the bulls by grabbing them by the back or horns. The bull owners say the animals are treated well.

Anger over the three-year ban boiled over this week after several hundred people in Tamil Nadu were arrested for defying the law. In response, tens of thousands of people have been protesting in the state capital, Chennai, and other cities over the past week to demand the ban be lifted. The protests shut down transport, schools and businesses. A number of prominent celebrities also threw their support behind the protesters. 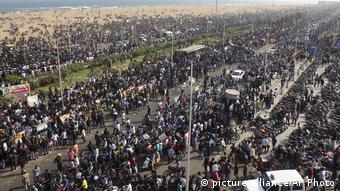 Tens of thousands of protesters gathered for a week on Chennai's beach area demanding the ban be lifted.

The protesters said the ban was an attack on the culture and traditions of Tamil Nadu. The issue escalated into a full-blown political crisis between the central government and the state, raising larger questions about the influence of elites in Delhi over more traditional rural areas in a diverse country like India.

The protests prompted Tamil Nadu's chief minister O. Paneerselvam to head to Delhi on Thursday to urge Indian Prime Minister Narendra Modi to overturn the ban, which he did on Friday. To allow Jallikattu, India's animal cruelty act was amended to remove the bulls used in the festival from a list of animals which cannot be exhibited or used for fights or races.

The Tamil Nadu governor then issued an executive order on Saturday to allow Jallikattu to start on Sunday. The order is only valid for six months.

The ban has only been lifted temporarily and protesters said they would continue to take to the streets until Jallikattu was allowed permanently. The Supreme Court said on Friday it would defer a decision until after animal rights groups filed a new petition challenging the removal of bulls from the animal cruelty act list.

Paneerselvam has announced plans to draft a new law in the state next week to permanently allow Jallikattu.

Festivals of man and beast

Besides being used for transport, agriculture and being kept as pets, in many parts of the world, animals are integral to customs and cultural traditions. While some are celebratory, others are simply horrific. (20.01.2017)

Uncertainty looms over Asia as it prepares to deal with Trump's US presidency. DW analyzes how China's economic ambitions, Afghanistan's security challenges, and Southeast Asia's political turmoil could define 2017. (26.12.2016)

Trash. It's a huge problem all over the world - especially in growing cities. From waste-pickers in Mumbai to board games in Bangalore, Sella Oneko explores how India, population 1.25 billion, deals with garbage. (09.12.2016)