India hijab row: 'All I want to do is study'

Muskan Khan, a college student in Karnataka state, told DW that she is not afraid of the Hindu right-wing activists who want to enforce a veil ban in educational institutes. The row has now spread across the country. 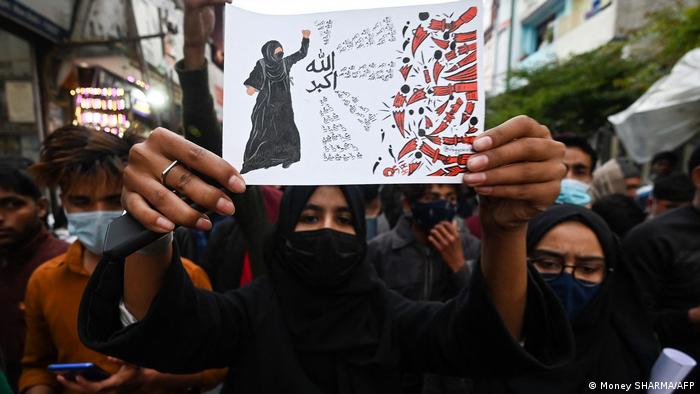 Huge protests have erupted across Karnataka state following the government's decision to ban hijabs, or headscarves, in schools and colleges.

After six students were banned from entering a college in Karnataka's coastal Udupi district for wearing hijabs on January 1, the debate over the rights of Muslim women, pluralism and secularism has gripped the entire country.

Amid escalating communal tensions and sporadic violence, authorities have closed all high schools and colleges in the southern state for three days.

The state's High Court is hearing two petitions on the issue and will decide whether to keep the ban or discard it. One of the petitions argues that it is a citizen's fundamental right to choose the attire, and that is guaranteed by the country's constitution.

The other petition challenges the legality of the government's decision to enforce a dress code in educational institutes.

DW contacted several ruling party officials, who said they didn't want to comment as the matter is now in court.

The hijab row, however, was echoed in the national Parliament, with opposition parties staging a walkout.

Parliamentary Affairs Minister Pralhad Joshi, who is a lawmaker from Karnataka, told reporters that "all students must follow the dress code prescribed by schools and their administration."

The issue became more prominent when a video of a college student became viral on social media. It showed Muskan Khan, a second-year student of Mandya College, being heckled by Hindu right-wing activists. They were purportedly supporting the dress code in the college. Khan, a Muslim girl clad in a burqa (face veil), confronted them and shouted "Allah Akbar" (God is great in Arabic). She refused to remove her veil.

Khan is now being hailed by many Indian Muslims as a "hero" who stood for the rights of minorities.

"They were not allowing me to enter college because I was wearing the burqa. They started shouting Jai Shri Rama (Hail Lord Rama), so I started yelling Allah Akbar," Muskan told DW over the phone from Mandya.

"All I want to do is study, and these people are stopping us. But I am not afraid," she added.

Supporters of the ban argue that it is the right of college authorities to decide what kind of attire the students are allowed to wear. But many Muslims, and India's secular sections, counter it by saying that it is every individual's basic right to exercise religious beliefs.

"The hijab is a part of cultural and religious identity of the Muslim women. It is like mangal sutra (necklace) for Hindus, the cross for Christians, and turbans for Sikhs," T N Prathapan, a lawmaker from the opposition Congress party, told DW.

Prathapan said the constitutional rights of all citizens must be protected.

"Refusing to let girls go to school in their hijabs is horrifying. The objectification of women persists, for wearing less or more," Yousafzai tweeted.

Some experts say the BJP is deliberately igniting the issue for political gains.

"What to eat and what to wear is a fundamental right. The BJP is trying to impose its choices on people. This is nothing but majoritarian politics at play," Nawab Malik of the Nationalist Congress Party told DW.

Activists say attacks on Muslims, who number about 200 million of India's 1.4 billion population, have increased since Modi took power in 2014.

Communal tensions are also on the rise in Karnataka, a state ruled by the BJP. According to the Karnataka Communal Harmony Forum, the state's coastal districts witnessed over 120 communal incidents last year, the highest number in the last four years.

A recent report by the joint initiative of the United Christians Forum, the Association for Protection of Civil Rights and United Against Hate revealed that at least 305 incidents of violence against Christians took place nationwide in the first nine months of 2021. This includes at least 32 incidents in Karnataka alone.

Cynthia Stephen, a social policy researcher in Karnataka, said the BJP "could have nipped the issue in the bud" much earlier.

Kavita Krishnan, of the All India Women's Progressive Association, told DW that the headscarf issue could easily be used as a justification for mob attacks on Muslims.

"Hijab is only the latest pretext to target Muslim women. It came after Hindu supremacists held multiple online auctions of Muslim women and made speeches calling for their sexual and reproductive enslavement," Krishnan said.