India: Frequent heat waves a reminder of climate change impacts | Asia | An in-depth look at news from across the continent | DW | 31.03.2022 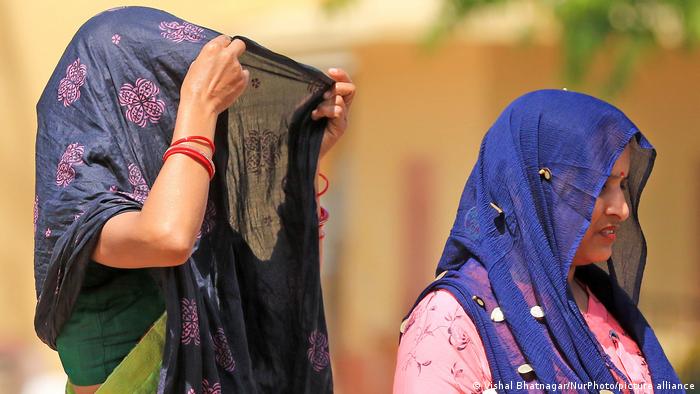 Women in Rajasthan, India during a heat wave this week

Parts of northern India have experienced over a dozen heat waves in March, and the Indian Meteorological Department (IMD) forecasts the unusually hot weather will continue into April.

Severe heat waves, which were rare in the past, have become yearly events in India.

The IMD declares a heat wave when the maximum temperature tops 40 degrees Celsius (104 Fahrenheit) in a region with low elevation. A heat wave is also considered when temperatures reach at least 4.5 degrees above the normal average temperature.

A "severe" heat wave is declared if the departure from normal temperature is more than 6.4 degrees, according to the IMD.

R Krishnan, a senior climate scientist from the Indian Institute of Tropical Meteorology, told DW that while such heat-wave events have been observed in the past, they seem to now be getting more severe and lasting longer.

"There is increased temperature in a region for a few days and then it returns to normal. But what we have seen in the recent years is that the heat waves have increased both in frequency and severity," Krishnan said.

India has also experienced other unusual weather conditions in 2022. The coastal metropolis of Mumbai has experienced uncommon heat waves this year, and dust storms blew across the Arabian Sea toward Mumbai from Afghanistan and Pakistan in January and February.

Two subtropical depressions also formed in ocean surrounding India in March, which is rare so early in the year.

The 2021 and 2022 reports issued by the Intergovernmental Panel on Climate Change (IPCC) have warned that in South Asia, heat waves and humidity-related heat stress are set to intensify.

Frequent and intense heat waves, extreme or abnormal rainfall events and other odd weather-related calamities in the coming decades are in store for India, according to the report. The IPCC report also warns that there is also an increased likelihood of droughts in already arid areas.

By the end of the century, the IPCC predicts South Asia will be one of the hardest-hit regions in the world by heat stress, and "deadly" heat waves could push the limits of human survivability.

Scientists at the Indian Institute of Tropical Meteorology (IITM) have also analyzed sea surface temperature in a section of the western Indian Ocean and Bay of Bengal between 1982 and 2018. They found that over 150 marine heat waves occurred in the areas examined.

During this time period, the marine heat waves increased four-fold in the Indian Ocean and three-fold in the Bay of Bengal.

Heat waves are of tremendous significance in India due to its largely agrarian society, which depends on stable weather patterns. Heat waves on land disrupt agricultural yields, which is a vital source of income for farmers living in central and northwestern India.

Marine heat waves, which cause bleaching of coral reefs and disrupt marine ecosystems, affect coastal communities which depend on fishing.

Krishnan said that human-induced increases in surface temperatures caused by greenhouses gases are a likely cause for such abnormal weather conditions.

"Greenhouse gases like C0-2 have a long life. Even if we reduce emissions significantly, we may see its effects in the coming decades," he said.