As India reels under a calamitous second wave of coronavirus infections, authorities are insisting on rapid antigen testing, instead of adopting new technologies. 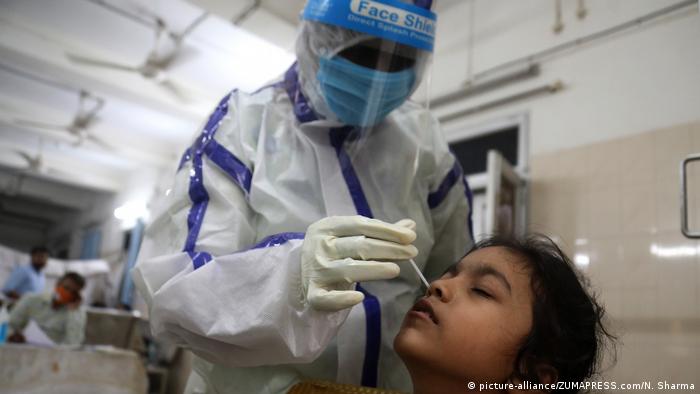 India's coronavirus death toll passed a quarter of a million on Wednesday in the deadliest 24 hours in the country since the pandemic began.

The country continues to be severely affected by the virus' rapid spread nationwide, with several states reeling under the shortage of medical oxygen, essential drugs, beds, health workers and vaccines, among other vital supplies.

Reports suggest that the disease is now rampaging through the countryside, overwhelming the already fragile rural healthcare system.

Three-fourths of India's 718 districts have what is known as a test-positivity rate above 10%, including major cities like New Delhi, Mumbai and the tech hub of Bengaluru.

On Tuesday, the Indian Council of Medical Research (ICMR), the nation's apex medical body, revised norms for testing, with a particular focus on rural India.

The focus, it said, should not be on RT-PCR tests but instead on Rapid Antigen Tests (RAT), which will help in surveillance and in breaking the chain of transmission.

"There is no need to do a second RT-PCR test and we are now moving from a 70-30 ratio of RT-PCR to the reverse of more antigen tests," ICMR Director General Balram Bhargava told reporters.

Concerns about overreliance on antigen tests

RT-PCR tests detect the presence of viral RNA. The test, which is very accurate, is able to detect a COVID infection even before the person becomes infectious, which helps to prevent virus transmission to other people.

They, however, are more expensive, time consuming and need a highly professional staff.

Antigen tests, on the other hand, detect viral proteins in patients at the peak of the infection. They are not considered to be as accurate as the RT-PCR tests. When using antigen tests, a significant number of people infected with the virus show up as negative, which could result in the authorities missing many infections.

In a few days, these people will likely spread the virus to others thinking they are healthy.

That's why many experts have concerns about relying solely on antigen tests.

"Too much reliability on rapid antigen tests that show a lot of false negatives is a questionable thing, and I think the government may have to reconsider it," a senior pulmonologist at the All India Institute of Medical Sciences, who asked not to be named, told DW.

"Right now, the number of people asking for a test is high and there are not a great number of RT-PCR test labs," the doctor added.

Other scientists believe the problem is not so much with antigen tests per se as with the quality of the tests that India is using currently.

ICMR's own tests show just 50-60% accuracy, which means 40 to 50 of every 100 infections are being missed. "There are a lot of false negatives," Srinath Reddy, president of the Public Health Foundation of India, told DW.

Some experts suggest that India should adopt newer antigen technologies to better test and track the spread of the virus.

"We know the pandemic's vast scale and spread has strained the ability of India to test all of their citizens, making it difficult to track the twisting paths of infection," T Jacob John, a renowned virologist, told DW.

"I think we should be adopting newer antigen technologies which are faster and accurate."

A nasal swab is inserted into a small, portable device, and a visual result is provided within about 15 minutes, similar to a home pregnancy test.

Companies and academic research labs are also rolling out other tests that are faster, cheaper and more user-friendly than standard RT-PCR ones, although they are not being produced on the same scale as antigen tests.

Some of these other tests use the gene-editing tool CRISPR to zero in on genetic snippets of the coronavirus.

Researchers from the Institute of Genomics and Integrative Biology (IGIB) in India's capital New Delhi have also been working on this technology for several months. They have modified their gene-editing technology-based paper-strip diagnostic kit in such a manner that a simple PCR test can be used to detect mutated variants of COVID.

"This will make detecting the new variants simpler and eliminate the need for complete genetic sequencing for diagnosis, which raises the cost manifold and takes about three days," Debojyoti Chakraborty, senior scientist at IGIB and part of the team that developed both the tests, told The Hindustan Times daily.

But its rollout has yet to happen.

India's health care system, meanwhile, continues to be overwhelmed by the ferocity of the second wave.

Lacking beds, drugs and medical oxygen, hospitals have been forced to turn away droves of sufferers, while tales of desperate relatives searching for someone to treat dying loved ones have become commonplace.

The Health Ministry on Wednesday said that it had registered a record 4,205 COVID-related deaths in the past 24 hours, while the number of infections rose by 348,421, carrying the tally past 23 million.

While experts believe the actual numbers could be five to 10 times higher, they're unable to say with certainty when the figures will peak.