The Central Vista plan, derided as a vanity project, will cost billions at a time of uncertainty for the Indian economy. Critics fear the project will also lead to environmental degradation in Delhi. 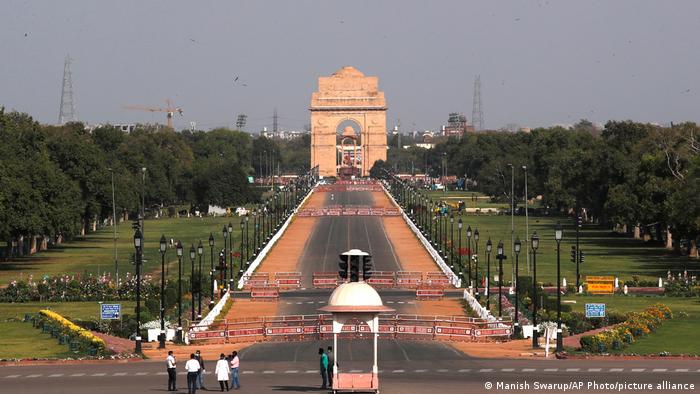 The Rajpath boulevard in New Delhi

Few infrastructure development projects in India have prompted a backlash from civil society like the Central Vista project in the heart of the national capital New Delhi. The government's grand albeit contentious plan to revamp the main boulevard of the city has been criticized as a waste of resources and detrimental to the environment of the world's most polluted capital.

But Prime Minister Narendra Modi's Hindu nationalist government has moved ahead with it regardless of the opposition, laying a foundation stone for the new parliament building — the centerpiece of the project — at a ceremony last week complete with religious rituals.

The ceremony was largely a symbolic launch of the project as the construction work cannot begin until a series of legal challenges currently pending in the Supreme Court are dealt with.

Activists, environmentalists and urban planners have taken the government to court over the project, arguing that key procedures to ensure transparency were not followed and that the decision to redevelop the Central Vista area, a heritage area, was made without public consultation.

The government first announced the project in September 2019. It is estimated to cost 200 billion Indian rupees (€2.23 billion, $2.72 billion) and scheduled to be completed by 2024.

It will include a new triangular parliament complex, new government buildings for central ministries, a new prime minister's office, and residence, and a new enclave for the vice-president.

The new parliament will cost 9.7 billion rupees and is expected to be built by 2022, in time to mark 75 years of Indian independence.

The controversy surrounding the project stems, in part, from its timing and the enormous cost. The project comes at a time when the country's economy is reeling under the coronavirus pandemic, its healthcare system is on the verge of collapse, and the unemployment rate is at record levels.

Critics and opposition parties have called on the government to instead use the funds to combat the pandemic or revive the economy. 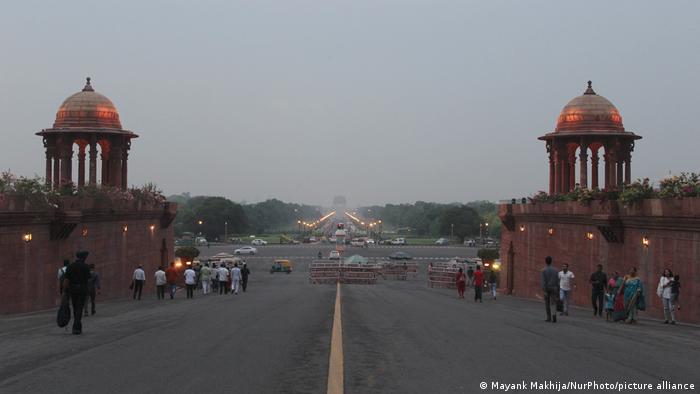 India's presidential palace, the existing parliament complex, and much of the surrounding area were built in the early 20th century under British colonial rule

Heritage buildings too old to use?

India's presidential palace, the existing parliament complex, and much of the surrounding area were built in the early 20th century under British colonial rule.

The area and the buildings that today house the parliament and central government ministries were designed by architects Edwin Lutyens and Herbert Baker in the 1920s.

The government has argued that the 97-year-old parliament building is too old and structurally unsafe for continued use. Also, it cannot be equipped with high-tech communication systems needed in a modern legislature, they said.

Anuj Srivastava, a retired army officer and Delhi-based architect who is also one of the petitioners in the Supreme Court case against the project, points to architectural conservation in response.

"Conservation architecture deals precisely with this kind of adaptive reuse of buildings and we have carried out paper studies based on plans available in the public domain which show that retrofitting can accommodate the changing requirement of these buildings," Srivastava told DW.

"We believe the need and necessity for this project have not been established. The project deals with the most iconic space in the country in a very unplanned manner," he said.

Srivastava expressed his opposition not only to the project but also to the way it was being carried out. "There is no transparency in the project. We are against the cavalier manner in which a heritage area is being treated," he said.

The federal government also believes that bringing all central ministry buildings to one area as part of the project, will make government functioning more efficient and economical.

"Many of the post-independence buildings are not earthquake-resistant and cost us on repairs. Also, the government spends about [10 billion rupees] every year on renting facilities for government offices," Federal Minister Hardeep Puri, under whose ministry the project is being carried out, said in September.

This has been dismissed as a "fallacious argument" by experts who say the government will instead end up spending more on rent.

Madhav Raman, an architect and member of Lokpath — a Delhi-based collective involved in one of the petitions against the project — explains how the current rent paid by the government is a circular, no-profit-no-loss rent.

"All ministries sit on land that is owned by the president of India. There is a dedicated office called Land and Development Office (L&DO) that serves as a lease manager for the president to these ministries. Central vista also comes under its purview. Every year, the government budget allocates a rental amount to every ministry. The ministries pay this rent to the L&DO which deposits it back into the consolidated fund of India," Raman told DW.

"This amount goes mainly towards the maintenance of the premises," he said. "So, constructing a newer and bigger office for these ministries will have a higher maintenance cost."

A major concern is that the Central Vista project will strip the city of a vast green cover and aggravate the problem of air pollution in New Delhi which reaches hazardous levels every winter.

Under the plan, the old parliament building will be converted into a museum, and trees that line the Rajpath (King's Way) boulevard — the site of the annual Republic Day parade — will be moved to make space for the new buildings and transplanted near the outskirts of the city.

Bhavreen Kandhari, a Delhi-based environmental activist has argued that transplantation is not possible.

"The soil is so weak, the air is so bad, the water is so polluted that transplantation is impossible," Kandhari told DW. "The government is pampering itself with the Central Vista project, instead of taking care of its people and their health."

One of her biggest worries is the rise in air pollution due to the vast amount of debris that will come from the project.

"In the immediate short-term, there will be a huge amount of construction dust. An estimated 700 trucks of debris will be carried back and forth from the site every day for the next four years," she said.

Another concern is that the tree-lines vista, a popular tourist site, will be cordoned off and public access will be limited once it's redeveloped and surrounded by new government buildings.

"The government is encroaching into public spaces," Kandhari said. "As much as they insist that the Central Vista will remain a public place, we know that it will never be the same."

More than 1,500 people have died in elephant attacks in India in the past three years, and 300 of the animals have been killed in retaliation. Authorities are seeking long-term solutions to stop deadly encounters.