Bangladesh and India have sealed a land swap, allowing 50,000 people in border enclaves to choose their nationality after decades of stateless limbo. Indian Prime Minister Narendra Modi is in Dhaka for a two-day visit. 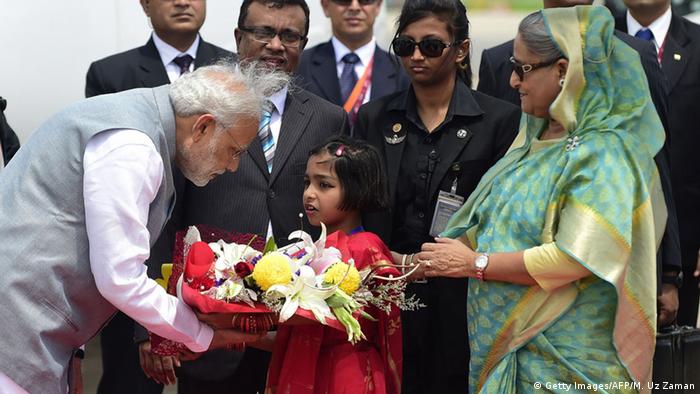 On Saturday, the foreign secretaries of Bangladesh and India signed a protocol and exchanged instruments of ratification to make operational the Land Boundary Agreement (LBA).

Modi, in Dhaka to meet with Hasina, compared the agreement to the dismantling of the Berlin Wall, calling it "a watershed moment in our ties with Bangladesh."

The 4,000-kilometer (2,500-mile) border remained disputed since Bangladesh, with India's assistance, seceded from Pakistan in 1971. Though Bangladesh had endorsed it back in 1974, India's parliament did not ratify the deal until this year, and a final agreement on the ownership of 162 enclaves - essentially islands of land resulting from ownership arrangements made centuries ago by local princes - had proved elusive until Saturday. Border disputes continue to dog India's relations with China and Pakistan.

Modi has had a run of security meetings in recent weeks, receiving German Defense Minister Ursula von der Leyen in New Delhi in May, and then less than a week later speaking with US Defense Secretary Ashton Carter.

The countries will swap territories in Assam, Tripura, Meghalaya and West Bengal, allowing 50,000 people - many of whom, without access to national governments, lack schools, clinics and utilities - to choose their citizenship. Fifty-one of the territories will got to India and 111 to Bangladesh.

The LBA represented the main objective of Modi's first trip to Dhaka since he won his post last May. Indian Foreign Secretary Subrahmanyam Jaishankar told reporters that the deal would also aid in the fight against human trafficking and drug smuggling on the border.

"The enclaves in the past have been territories out of bounds for law enforcement agencies," Jaishankar said ahead of the signing. "Often they have been misused to seek refuge by elements who have been undermining law and order. So the clarity and discipline which will come from the clearly demarcated borders will help the land border between the countries much more secure."

Over the weekend, Modi, Hasina and their subordinates could sign up to 20 agreements to boost trade and transport. However, no one expects a breakthrough in a dispute about the sharing of water from the Teesta river, which flows through both nations.