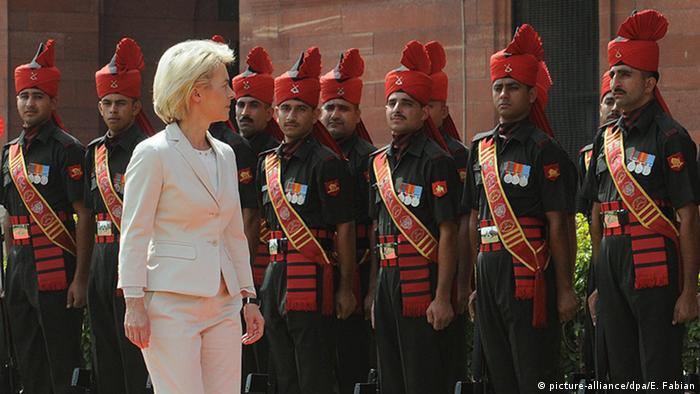 The talks with Modi will focus on strengthening the strategic partnership between the two countries.

India, the the largest arms importer in the world, is investing billions to modernize its military and Von der Leyen has called the country an "anchor" in the Asia-Pacific region. The south Asian nation is one of the most important markets for German arms exports outside NATO.

Strengthening economic ties will also be on the agenda during von der Leyen's visit. India is currently in the midst of a major campaign, dubbed "Make in India," to encourage companies to manufacture their products in the country.

"Germany is an important partner for us when it comes to the Make in India initiative," Indian defense sources told PTI.

Prime Minister Modi was voted into power one year ago and he and his ruling Bharatiya Janata Party (BJP) government have met with mixed reaction.

Modi has conducted an energetic foreign policy, seeking closer relations with the United States, China, Japan, Australia and Israel, and his government - unlike that of his predecessor - has been scandal-free.

But the Indian economy remains sluggish, and Modi has been criticized for not acting forcefully enough to institute economic reforms.

Opposition leader Nitish Kumar criticized the prime minister, saying in a recent editorial that the Indian people had voted for selfless leadership and got only "selfie leadership," a reference to Modi's frequent posting of pictures of himself on social media.