Once again, floods have ravaged parts of India and Pakistan. Those who are affected by the calamity still need relief. However, the frequency of the floods in the region tells us it can't be just a natural disaster. 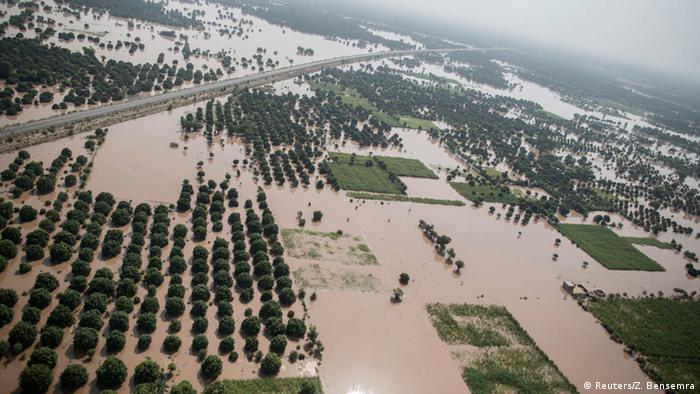 Fallen trees and broken rooftops floating around in muddy waters: that is the aerial view you get after more than a week of catastrophic floods in India and Pakistan.

The flooding in the two South Asian countries began on September 3 due to heavy monsoon rains. Since then, the waters have been moving downstream from Indian-controlled Kashmir through Pakistan's Punjab, inundating vast swathes of villages and small towns.

The heavy rain in the Himalayan region caused the swelling of the rivers. The ensuing floods since then have destroyed thousands of houses, roads and fields on their path. In both countries, the army, police and volunteers have been trying to rescue the survivors, transporting them to safe places.

The number of casualties is not clear yet. As long as the water is not completely drained, it is difficult to gauge the extent of the disaster. According to an Indian official, more than 200 people have been killed, and around 200,000 remain stranded in the Indian state of Jammu and Kashmir. The situation in the Pakistani part of Kashmir and in the Punjab province is not very different. Pakistan's National Disaster Management Authority (NDMA) put the figure of victims around 280. About two million people have been displaced, it estimates. 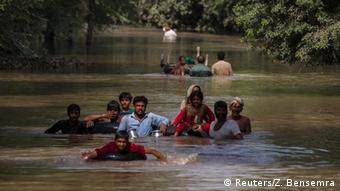 "We have not witnessed a disaster of this magnitude in about 60 years. Surely, nobody was prepared for it," Ray Kancharly, a disaster management expert in India for the organization Save the Children, told DW. The expert adds that despite the danger to their lives, many people do not want to leave their homes. "People are afraid that their belongings will be stolen. That is why they climb on to the rooftops and wait for the relief there."

Floods are frequent in India and Pakistan. Every year, monsoon rains between June and September trigger immense flooding. In 2012, the floods in Pakistan had affected around 20 million people – some 1,800 were killed.

The current floods are probably not as enormous, but that is little consolation for the survivors. "The victims are always the common people," a man from the Pakistani town of Jhang told DW. "The government is exerting pressure on the population. The people are helpless and are left with few belongings, fleeing their homes," said the man.

Breaching dams to divert the flow of water is a common practice during floods. The Pakistani army did the same in Multan on Friday, September 12, to prevent the historic city from submerging. But Sunita Narayan, the director of the Centre for Science and Environment in New Delhi, says that blowing up dikes does not solve the problem due to the fact that the recurrent floods in the region are a man-made phenomenon: "What we see here is indeed a natural disaster, but actually we are responsible for it as we continue to meddle with nature," Narayan told DW. The expert adds that dams and hydroelectric power plants are useful but the question is where they should be built and how many are actually needed.

Pakistani water and energy minister Khawaja Asif shares this view: "People build houses and shops on the paths of the rivers," he told the news agency dpa.

Experts say that population growth is driving more and more to settle in the vicinity of the rivers. Previously, there were more than 200 waterways initiating from the northern Himalayan region and culminating in the southern Indian Ocean; presently, there are less than 20. When rivers are straightened and artificially narrowed, they can no longer endure heavy rains and end up overflowing their banks.

Gaurav Ray of the Red Cross South Asia believes that preventive measures should be taken to deal with future monsoons and floods. "There is nothing we can do to avoid natural disasters but we can prepare better," he told DW. By preventive measures, Ray means early warning systems, disaster management, and stocking of sufficient relief items.

In theory, it all sounds good, but when it comes to implementation, people say the authorities never work in advance. The man from Jhang is bitter and disappointed by the Pakistani government. Although he has erected a makeshift camp in the desert of Thal, there is nothing that he and other flood survivors have received from the authorities.