On his final international tour as US president, Barack Obama has advocated for debt relief for Greece. The Greek prime minister is counting on Obama to deliver that message to Chancellor Angela Merkel later this week. 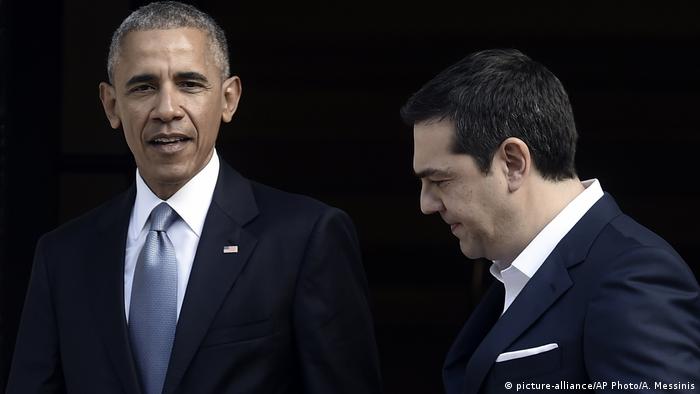 US President Barack Obama told journalists in Greece Tuesday that debt relief will be needed if the Athens government is to get the country's economy back on solid ground.

And Greek Prime Minister Alexis Tsipras said he was confident the US president would effectively deliver that message to Chancellor Angela Merkel and other European leaders later this week when he arrives in Germany.

Obama is due to arrive in Berlin on Wednesday for talks with Merkel as well as French and British leaders. The US president said he would push for help for Greece.

"In my message to the rest of Europe I will continue to emphasize our view that austerity alone cannot deliver prosperity," Obama told Tsipras.

Even with structural reforms, he argued, "it is very difficult to imagine the kind of growth strategy that is needed, without some debt relief mechanism...(although) the politics of (doing) this are difficult."

Many European Union (EU) leaders are wary of granting Greece debt relief because they fear it will set a bad precedent - emboldening leaders in other poorer EU countries to engage in reckless budget management with the knowledge that the broader EU community will bail them out if it all goes bad.

Merkel in particular has been an outspoken advocate for austerity, which Greece has undertaken. But there is a growing chorus, which includes the US and the International Monetary Fund (IMF) that austerity alone will not solve the country's economic crisis.

Athens has hailed Obama's visit as being of "huge importance" for both Greece and Europe. The country's left-of-center coalition government has been struggling to pull Greece out of a vicious six-year long financial crisis that has devastated its economy and left more than a quarter of the workforce unemployed.

Tsipras's government has pinned its hopes on the US president to help persuade some of the country's more reluctant international creditors, such as Germany, to grant it significant debt relief.

Without a cut in its debt, Athens has said, it cannot hope to recover economically - an argument also supported by the IMF.

Greece has been subsisting on emergency loans from three consecutive multi-billion euro bailouts from other European Union countries using the euro currency, and the IMF, since 2010.

The United States has not been involved in Greece's bailout, but Athens has long seen it as an ally that could apply pressure to creditors.

The US has praised Greece's efforts to overhaul the Greek economy but has repeatedly stressed the country must continue with painful reforms. The country's bailout funds are disbursed following reviews by international debt inspectors of mandated reforms.