In Germany, pressure mounts to handle right-wing violence against refugees

German politicians have called for the government to take tougher action to prevent appalling right-wing incidents against refugees. The police are also facing criticism. 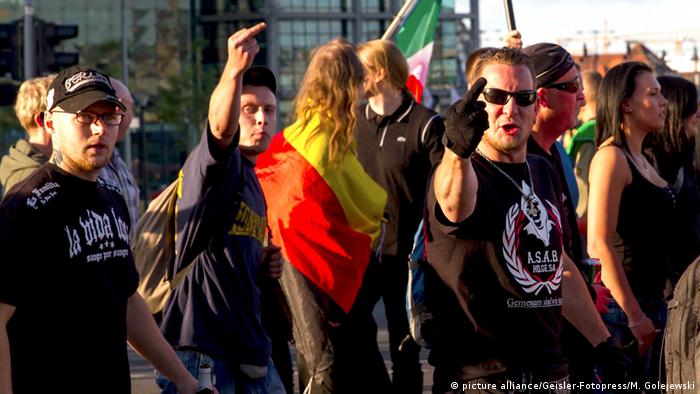 German politicians on Monday responded to the fallout from two anti-refugee incidents in Saxony over the past week, calling for stronger steps to ensure refugees are protected from right-wing mobs.

"The chancellor will have to give a statement next week on how the government plans to stop the racist mob and protect refugees," Dietmar Bartsch, head of the opposition Left Party, told the "Tagesspiegel" newspaper Monday.

A fire that police believe was set by an arsonist to a planned refugee accommodation in the town of Bautzen was met with cheers by onlookers who blocked firefighters on Saturday night. The fire came days after a bus carrying frightened refugees was blocked from entering nearby Clausnitz by a mob shouting anti-immigrant slogans.

Saxony has been the center of right-wing movements, such as PEGIDA, targeting refugees.

The two incidents, coming as Germany experiences a rise in right-wing verbal and physical violence against refugees, has put mounting pressure on the government to take additional action to protect refugees.

"The German Bundestag must make unmistakably clear that we cannot tolerate anything like this," said Britta Hasselmann, the Green Party's parliamentary leader, on Monday. "Hate, discrimination or violence against people cannot be allowed."

Saxony's Interior Minister Markus Ulbig, a member of Chancellor Angela Merkel's Christian Democratic Union (CDU) party, has vowed to conduct a thorough investigation into what she has described as "appalling and sickening" behavior.

On Monday, police authorities established an 11-person investigative group to look into the incident in Clausnitz.

But Ulbig defended the response from police, who have come under heat for their handling of the situation.

Video from the bus incident appears to show police dragging frightened refugees off the bus into a building, a measure police authorities said was to protect the refugees.

Others viewed the measures as too harsh, especially for the younger refugees.

"It is entirely unacceptable" that the young were dragged from the bus "in front of a raging mob in this way," Aydan Özoguz, Germany's refugee and integration commissioner, told German radio WDR 2 on Monday.

"I would also hope that the policy coming out of Saxony would develop some clear words and also a better-coordinated approach of police," the Social Democrat said.

The criticism has prompted the police to push back and defend their handling of the situation.

Oliver Malchow, the head of the Police Union (GdP), said on Monday that politicians should not just make statements against the police based on "snippets of film" without taking into account the larger context of events.

Representatives should not "so easily broadcast blanket charges against the police from the ivory tower of the politics of Berlin," Malchow said on Monday.

He added that better coordination between local municipalities and police was needed.