The recent death of a construction worker in custody has triggered a wave of protests against police violence. Officers claim that they have been left in the lurch by politicians and need more resources. 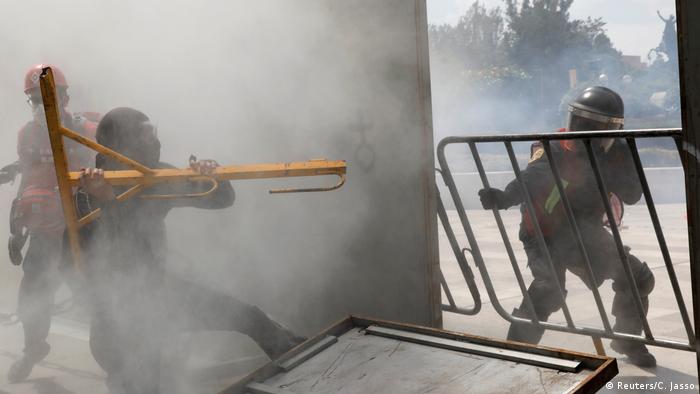 On May 4, the 30-year-old construction worker Giovanni Lopez was detained by 10 municipal police officers in the city of Ixtlahuacan de los Membrillos, not far from Guadalajara, the capital of the state of Jalisco. Governor Enrique Alfaro said Lopez had been arrested for "aggressive conduct." Lopez's relatives said he had been detained for not wearing a face mask in public.

Lopez was delivered to the emergency room of the municipal hospital that night, examined and returned to police custody. In the morning, he was brought back the hospital, where he died of brain injuries. Jalisco's state human rights commission has accused the police of torturing and executing him.

The incident triggered protests around Guadalajara, and three officers were subsequently arrested. This in turn has caused an outcry among police, who say they do not have adequate training or clear protocols for the use of violence.

Police violence has long been a structural problem in Mexico, where few people have much faith in law enforcement — which, alongside political parties, ranks among the least-trusted institutions in the country. The abduction of 43 students training to be teachers in the state of Guerrero in 2014 increased the animosity. Forty-four of the 80 people arrested in the investigation were regional police officers suspected of working in collusion with organized crime. The case shed a spotlight on the fact that politicians, drug cartels and police are often in cahoots in Mexico.

A study by the National Commission on Human Rights (CNDH) calculated 13,262 reports of arbitrary detention from 2001 through 2017, for an average of over more than two a day. According to the United Nations, torture remains a widespread method of forcing confessions in Mexico. In 2012, a survey by the Center for Research and Teaching in Economics (CIDE) found that 62% of people reported mistreatment, ranging from intimidation to abuse.

Edgar Cortez, of the Mexican Institute of Human Rights and Democracy, said police training did not usually last more than six months and officer pay averaged about €180 ($200) per month. "They are not given psychological training, and there are no clear protocols regarding the use of violence in a critical situation," he said. "There is no external evaluation either. Police officers are often left to their own devices and also scapegoated."

Cortez said legal measures had been introduced to address the situation in 2016, but added that politicians prefer to invest in modern courtrooms with video cameras to impress the public rather than focus on behind-the-scenes training programs.

Police dysfunction is also a result of federalism, Cortez said, with mayors and governors controlling regional units, which some use as their own personal squads. Because of this, he said, politicians have no incentive for policing to be professionalized.

In the states of Aguascalientes and Queretaro, police officers have been trained to raise awareness and provide information to residents. However, this could change in a minute, if new governors are appointed, said Catalina Perez-Correa, a researcher at CIDE.

The past four presidents of Mexico have all responded to the situation with the same answer: recentralization. The argument runs that municipal agencies are unable to fight organized crime, so there has to be a stronger central police force. Each president has introduced his own iteration of this — yet crime and violence have increased. In 2019, there were a record 35,588 murders. In the first four months of 2020, there were 11,535, an increase of 2.4% over the same period last year.

President Andres Manuel Lopez Obrador has attempted to find a solution by militarizing the forces of law and order. With its clear hierarchy, the 300,000-person army enjoys respect around the country. The president created a domesic military force, the National Guard, in 2019, to the dismay of rights activists. "A country this big needs a neighborhood police that works preventatively," Perez-Correa said.

Though the president also created a community-policing force last year, he did not provide it with much funding. According to the constitution, Perez-Correa said, the military is responsible for defending the country but not for law and order, for which it has not been trained.

The CNDH received 4,600 complaints from civilians about soldiers from 2012 through 2018. They ranged from illegal detention to extrajudicial execution.