Iraq has emerged as the country where the murders of journalists who ruffle feathers are least likely to be properly investigated. The annual index was published on World Press Freedom Day. 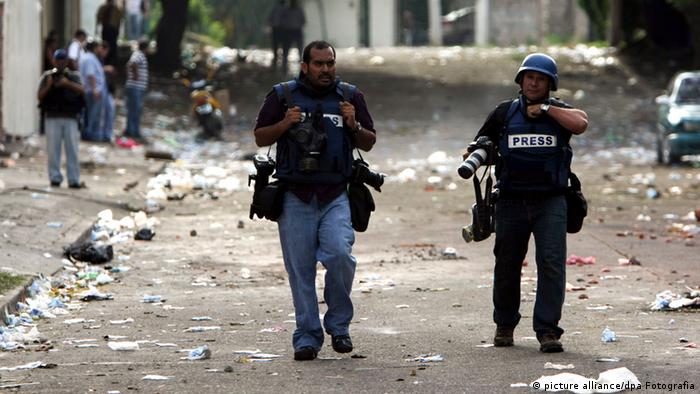 The Impunity Index, compiled by the international Committee to Protect Journalists (CPJ) group, includes those countries where the slayings of five or more journalists have gone unresolved.

Iraq ranked worst with 93 journalists killed in the last decade, but with no convictions at all for their murders.

The country has been a dangerous place for journalists going back to the US-led invasion of Iraq in 2003, although the number of media workers murdered is presently in decline there.

Among the other familiar names on the list were Afghanistan, Colombia, Mexico and Sri Lanka. A major concern, the CPJ said, was that there was a danger that journalists in those countries would practice self-censorship, failing to hold powerful and sometimes dangerous interests to account.

"Although Colombia has had modest success in solving murders, Afghanistan, Sri Lanka, and Mexico have failed completely in the prosecution of numerous past slayings," the group said. "These law enforcement failures often lead to another pernicious problem: widespread self-censorship."

Nigeria was included for the first time, with at least five members of the media murdered since 2009.

Violence against journalists and censorship by governments: on World Press Freedom Day, DW takes a look at the state of freedom of expression - and attacks upon it - around the world. (03.05.2013)

"Investigations into these killings are usually carried out with sloppiness, and no real culprits are caught," said Ayode Longe, a senior officer with the Nigerian press freedom group Media Rights Agenda. "That has emboldened others to assault journalists, believing nothing would be done to them."

Russia and Nepal were said to have shown an improvement. Nepal was taken off the list entirely, while there was a victory for Russian prosecutors in the case of investigative reporter Anna Politkovskaya's killing with the conviction of a former police officer.

"Although both nations remain dangerous for the press, both have seen a general decline in deadly anti-press violence and a handful of partly successful prosecutions in journalist murders," said the CPJ.

Brazil, which has seen a rise in killings despite successful prosecutions, moved up the list from 12th to 11th.

Syria was not included because all fatalities there were deemed to be combat related.

However, early on Friday, the human rights group Amnesty International said that both the al-Assad government forces and rebels were guilty of detaining and torturing scores of journalists over the past two years. The Amnesty report, "Shooting the Messenger: Journalists targeted by all sides in Syria," was also released to coincide with World Press Freedom Day.