Immigrants absent from German public sector | Germany| News and in-depth reporting from Berlin and beyond | DW | 04.12.2012

In the last decade Germany has made great strides when it comes to integration. A recent study, however, shows a relative absence of children of immigrants working in the public sector. The OECD sees cause for alarm. 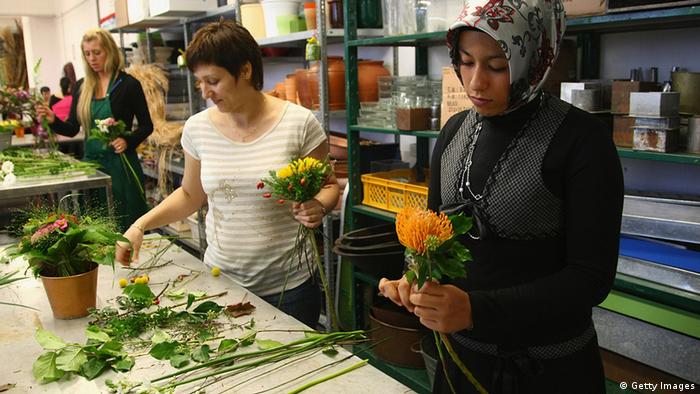 Apparently those who object to immigration in Germany are also in control of public sector jobs.

Or at least, that was the conclusion of a study by the Organisation for Economic Co-operation and Development (OECD) presented in Berlin on Monday. According to the study, Germany takes a "sad last place" compared to the 34 other member states of the OECD when it comes to children of immigrants in the public sector, said the director of the study, Thomas Liebig.

"In no other country is the presence of immigrants in the public sector so starkly underrepresented as in Germany," he said. 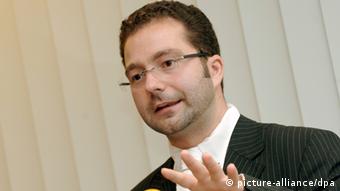 In 2008, children of recent immigrant families were half as likely to work as doctors, teachers or civil servants as their 15-to-34-year-old native equivalents (see graphic). Only in Luxembourg, Belgium and Denmark could a similar discrepancy be found in occupational statistics relating to public administration and public schools, hospitals and social work.

The deficit of immigrants working in the public sector should raise flags, Liebig believes, as it has the potential to send the wrong signal throughout German society. "As teachers, doctors or judges, immigrants can set an example for others," he said.

More immigrants employed by the state would help strengthen other positive trends, as well - above all else in the realm of education. According to a recent study, the proportion of newly-arrived individuals considered "highly qualified" has risen five percent in the last decade. "Recent immigrants are clearly higher qualified than they were ten years ago," Liebig said. 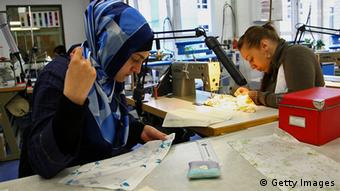 In other OECD countries this woman might have been a nurse

Germany, Denmark, Luxembourg and the Netherlands made particularly impressive advances in immigrant education levels. In Germany today, newly arrived immigrants are 12 percent more likely to have a high school diploma than ten years ago.

The progress being made in education can also be seen in the jobs market. In 2010, employment levels for immigrants of working age stood at 65 percent. That's just two percent lower than for those without immigrant backgrounds.

Particularly impressive were immigrants' inclusion as manual laborers in Germany's private sector. In the OECD statistics, children of immigrant families are even overrepresented by a small margin in that sector. What that shows above all else, Liebig says, is that higher levels of formal education cannot be seen as a guarantee for immigrants to Germany in terms of public sector jobs. 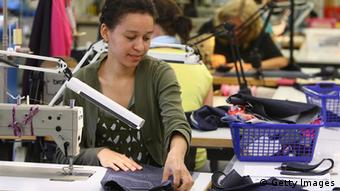 These women are training to become seamstresses in Berlin

At the OECD, experts see Germany's poor integration of children of immigrants into public service as a lack of political will. "Up to a few years ago no one made much of a stir about it," Liebig said. He criticized the German government's varied plans of action, all of which, he feels, severely neglected the topic. "Only in the last national integration plan did they recognize their omission and introduce the first measures to counteract it."

By comparison, other countries recognized early the beacon effect that public sector integration would serve throughout society. Norway, Belgium and the Netherlands enacted particularly progressive policies in order to make immigrations broadly visible throughout civil society.

"That's where Germany's stuck behind," Liebig said, "which is pretty regrettable given the influence of this country."

A German appeals court has ruled against police in a case of racial profiling, saying officers broke anti-discrimination law. Human rights groups have applauded the verdict, saying police must now change their practices. (30.10.2012)

With a surfeit of history on their hands, many German museums are only now discovering migration as a theme. It's a step in the right direction, says Austrian historian Regina Wonisch, but isn't enough. (09.11.2012)