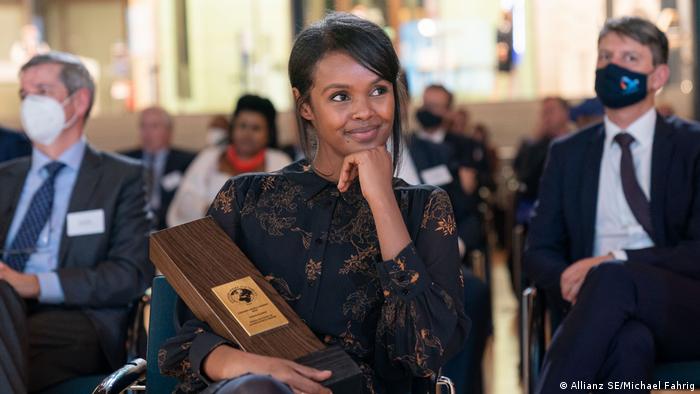 In times of the COVID-19 pandemic, attending this year's German Africa Prize ceremony in Berlin was quite a challenge for Ilwad Elman. Rather than flying directly to Germany from Somalia, she had to go into quarantine elsewhere due to coronavirus-related health measures.

But Elman, who fled war and terror in her native Somalia as a two-year-old and returned 17 years later, is used to fighting against the odds.

"With you, the German Africa Prize has a worthy, inspiring and deeply human recipient," German Foreign Minister Heiko Maas told Elman after presenting the award in the German capital Berlin.

"At only 30 years of age, you have stood up for the weakest members of society — child soldiers, survivors of sexual violence, the victims of Islamist terror."

Over the past couple of years, Germany has taken a number of steps to boost its economic and political presence in Africa, including by hosting several summits with African leaders in Berlin.

Critics, however, say that Germany's Africa engagement still lags behind that of countries like China or even European powers like the UK and France.

Maas promised more German involvement in Africa, including a larger diplomatic presence in crisis-hit areas, more strategic communication and continued support for initiatives such as the Compact with Africa and the G5 security alliance of regional governments against Islamist insurgents in the Sahel. 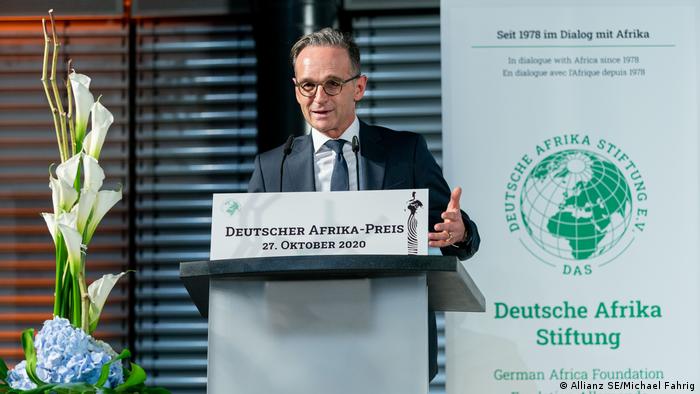 A voice for peace

Ilwad Elman is considered one of Somalia's leading peace activists. In 2010, she returned to her homeland after living as a refugee in Canada and set up various projects to rehabilitate child soldiers and victims of sexual violence. Her Elman Peace Center now employs over 170 people in eight branches across the country.

"Your credo is to open doors and walk through them. And you have managed to do exactly that. You have become an inspiration for young women and men in Somalia, on the African continent and elsewhere," Claus Stäcker, head of DW's Africa Programs and president of the jury of the German Africa Award told the audience.

"You have become a source of encouragement for Africa's young generation during these days of bloody violence against civilians in Nigeria, Guinea or against pupils in Cameroon," he added.

Somalia has been embroiled in civil war since 1991, when clan warlords overthrew dictator Siad Barre and then turned on each other.

Since 2008, the Islamist militant group Al-Shabaab has been fighting to overthrow the central government and establish its rule based on its own harsh interpretation of Shariah, or Islamic law.

Over the past few years, the security situation has improved in some areas, including the capital Mogadishu.

Like Elman, many Somali citizens have returned from exile in recent years to support the peace process.

"Over 75% of the population are younger than 30. This young majority has the chance to change the narrative of the crisis-torn nation, build a new Somalia where women and girls grow up with the same chances and where boys no longer go to fight in senseless wars," said Stäcker.

Elman said she was happy that the award gave her a chance to share the reality of life in Somalia and the need for cooperation with Germany.

"Things are changing every day in Somalia. There is so much more than ruins and bullets. There is life, there is community, there is love, there is laughter and there is resilience. Now more than ever, peace is within reach," she said.

The German Africa Prize has been awarded since 1993 to exemplary figures from the African continent. Past winners have advocated for democracy, peace, human rights, arts and culture, and social issues. Although not endowed, the Africa Prize is the highest award of its kind in Germany.

The selection is made by an independent jury and aims to portray a diverse image of Africa. Recent winners include Kenyan IT pioneer Juliana Rotich, Botswana's ex-president Sir Ketumile Masire, former Somali model Waris Dirie, and Tunisian union-leader Houcine Abassi.

The German Africa Foundation is funded by Germany's Foreign Ministry.