Iceland's coalition plans to hold elections in autumn. The country is feeling the first tremors of what could be a political eruption after the prime minister stepped down following the publication of the Panama Papers. 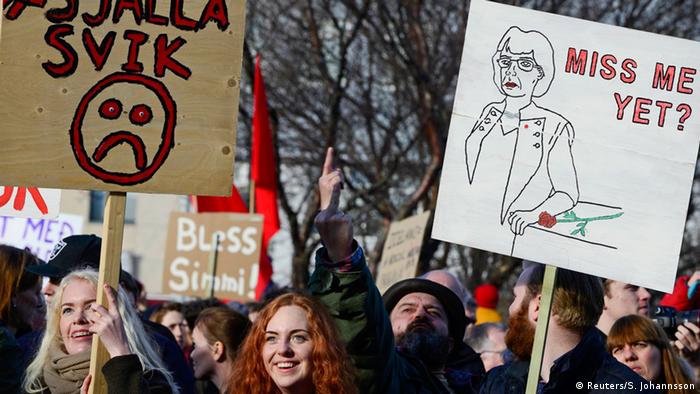 In a concession to opposition parties and the protesters who hounded Prime Minister Sigmunder David Gunnlaugsson out of office, Iceland's government announced that it would hold elections in autumn.

The Progressive Party and the Independence Party announced their decision hours after handing the briefly vacant premier post to Fisheries and Agriculture Minister Sigurdur Ingi Johannssonn, a 53-year-old Progressive.

"We have agreed that we will continue working together," Finance Minister Bjarni Benediktsson said late Wednesday.

Iceland had originally scheduled its next legislative elections for April 2017. The Pirate Party has led in recent polls, with 43 percent support, its new high, reached on Wednesday. The party entered the legislature with 5 percent support in 2013.

The announcement followed some initial confusion. "The prime minister has not resigned and will continue to serve as chairman of the Progressive Party," a spokesperson wrote in an email to news agencies on Tuesday.

Though he stepped down as prime minister following three days of massive public protests over a hidden offshore account revealed in the Panama Papers, Gunnlaugsson continues to serve as the faction's leader.

The documents showed that at one point he and his wife co-owned a firm with claims on the island's collapsed banks, sparking widespread protests. He later transferred ownership to her for the nominal fee of $1 (0.87 euros). A poll commissioned by the public broadcaster RUV found that 81 percent of voters wanted Gunnlaugsson to resign.

"What I think the government parties are trying to do is to cling onto power while doing the absolute minimum of changes in order to escape the public," said Arni Pall Arnason, the leader of the Social Democratic Alliance. "The government doesn't want to confront the issue or face the public."

Those named by the reporters from the papers include politicians, sports stars and celebrities from 80 countries, among them new FIFA president Gianni Infantino. He appears to have signed a television rights contract with businessmen implicated in a US corruption probe.