Hungary tries refugees for illegal entry | Europe | News and current affairs from around the continent | DW | 25.11.2015

Hungary rid itself almost entirely of migrants by building a border fence. It also deemed entering the country without permission a crime. Daniella Cheslow reports from the trial of a Syrian refugee in Szeged, Hungary. 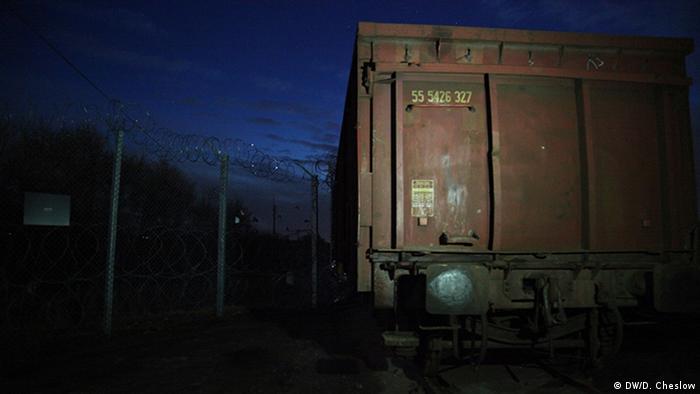 In the yellow-bricked Szeged courthouse, attorney Gabor Gyösö appealed Monday against the expulsion of a Syrian man who slipped across the Serbian-Hungarian border in mid-September.

"The court should consider the circumstances under which the defendant committed his so-called crimes," said Gyösö, with the Helsinki Committee human rights group. "The court has no empathy."

The three judges in the room rejected the appeal, but there was no one to expel. The Syrian and his family slipped out of Hungary around late September. One court in Szeged is making sure it's final by pressing charges against them and more than 600 migrants, in person or in absentia, who have crossed Hungary's newly built border fence since September 15.

As Germany groans under the weight of close to a million migrants, and Greek islands continue to see as many as 5,000 people arrive each day on rubber dinghies, in Hungary the foreigners have nearly vanished. Now the government is working to keep the migrants out of not only Hungary, but the rest of Europe, too.

"Europe is assisting, is providing a free ride, is basically transporting these people without any checking, without any control," said government spokesman Zoltan Kovacs. "We definitely believe this is a very dangerous precedent which should be stopped."

Kovacs said Budapest is providing money and manpower for border construction in Serbia, Macedonia and Slovenia. Inside Hungary, about 1,500 migrants remain of the more than 300,000 people who crossed the country over the summer, according to the Helsinki Committee. Prime Minister Victor Orban has vowed to challenge attempts by the European Union to impose a mandatory quota on Hungary to resettle 2,000 refugees. 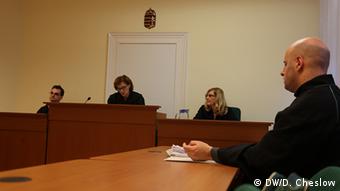 A spokesperson for the Szeged court wrote DW that since mid-September, 688 people were found guilty of the felony charge of crossing the border illegally. Almost all were sentenced to expulsions lasting between one and five years. The United Nations has ruled that crossing a border to seek asylum is not a crime; Hungary sees things differently.

"Even in the case of Syrians, that's a big question mark," spokesman Kovacs said. "Fleeing from war, say to Turkey, gives them the right to asylum. But that's a conscientious decision to set out on a thousand-mile journey, paying lots of money, using human traffickers, to reach a desired destination."

Evidence of Hungary's closed doors litter the country, from a newly built but empty tent city on the outskirts of Szeged, to the shuttered Debrecen camp for asylum-seekers two hours east of Budapest, to coils of razor wire stretched across the Serbian and Croatian frontiers.

Researcher Bori Simonovits at the Tarki Social Research Institute in Budapest said Hungarians support their government's hardline position. For the last three years, 40 percent of Hungarians have reported they do not want to accept any migrants, she said.

"I feel sad for them. Lot of people sitting in Keleti railway station and doing nothing," Kocsis said. All the same, he had his doubts. "If someone runs from a war, how do they have cell phones, clothes and money? Because war is different. Real war is different."

In this hostile environment, few migrants wish to stay in Hungary - but several hundred are stuck there because of Hungarian law enforcement.

An hour's drive west of Budapest is Bicske, where 12,000 Hungarians live in modest homes with sloping terra cotta and slate roofs. In September, hundreds of migrants in Bicske faced off against Hungarian police who tried to remove them from a train bound for Austria. Now, the town is quiet, and about 200 foreigners live in a camp on its outskirts. 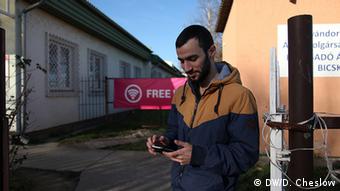 Abraham Baghdi Sar, 22, met DW outside the wooden slatted fence at the camp entrance. Last year he fled Damascus to dodge the draft and followed his parents, brother and sister to the Netherlands, but Hungarian police caught him and fingerprinted him as he traveled. Dutch immigration police deported him back to Hungary, where he has been waiting seven months for refugee status. While he waits, he uses the free wireless Internet at the camp to chat with his parents.

"Every day they tell me, 'hey go back to the Netherlands, don't care about your documents,'" he said. "If I don't have my documents here in Europe, I can't make my future here ... I can't study, I can't find a job."

'We can do better'

Prime Minister Orban's policies have fueled a wave of popularity for his Fidesz party in Hungary. Yet support is not unanimous.

Back in Szeged, in Hungary's south, computer programmer Balasz Szalai recalled his summer helping the thousands of foreigners who trudged through the city ordinarily known for its university and salami factory. On one cold night, Szalai crammed 16 migrant children into his 1977 Mercedes station wagon. Now, the border is sealed and the only migrants are in a detention camps nearby. Twice a month, Szalai crosses into neighboring Serbia to bring donated supplies to migrants still walking.

"The migrants are going the longer way to Europe, and it's not solved the problem," Szalai said. "We can do this better, with more humanity than we did."

UN General Secretary Ban Ki-moon has spoken out against filtering asylum-seekers by nationality, claiming that the procedure "infringes" on their rights. Several Balkan states are only accepting migrants from war-zones. (24.11.2015)

The Hungarian parliament has approved a bill that will allow Budapest to take the EU to court over a plan to redistribute refugees. Prime Minister Viktor Orban accused the EU of ignoring the will of individual members. (17.11.2015)

Peter Szijjarto: No #refugeeswelcome in Hungary?