Hungarian teachers were joined by other unionized workers in protesting the government's bid to centralize public education. This is not the first time thousands have protested Orban's government, but he remains popular. 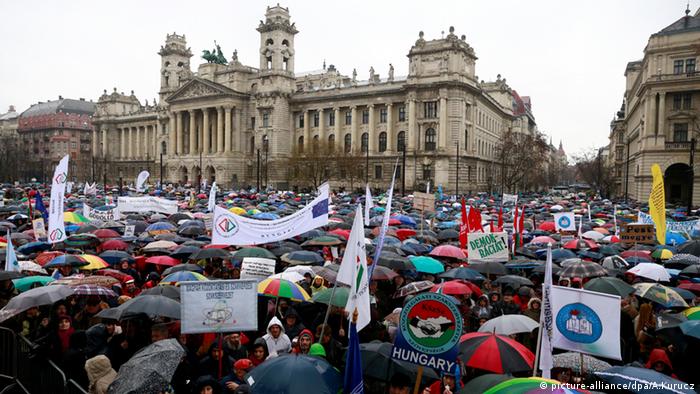 Thousands of Hungarians took to the streets of the capital Saturday to protest against education reforms imposed by right-wing Prime Minister Viktor Orban.

Teachers are demanding a substantial reduction in teaching hours and the freedom to choose textbooks. Despite the steady rain, they were joined outside parliament by other unionized workers, including miners and civil servants.

The demonstrators say the education reforms are part of the prime minister's centralization drive that has seen public institutions, including public broadcasters, fall under government control.

Some protesters shouted, "We won't let this happen." Others held banners saying "Don't chase our youth away." 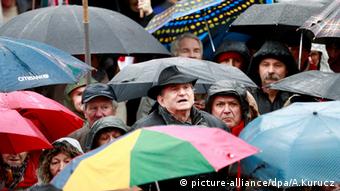 "This is our last chance to ensure that our children live in a normal country getting good quality education instead of the destruction that is going on," said Katalin Egressy, 46, who has four children.

Marta, a former English teacher and mother of three, said she came to protest because her children's future was at stake.

"The situation is worsening day by day, the raising of mandatory hours is overburdening teachers, and I don't like the mandatory textbooks either," she said, accompanied by her 3-year-old son.

Orban's government launched its reform of the public education system shortly after taking power six years ago, accusing schools of being too liberal, and failing children.

The government introduced a national curriculum, centralized teaching material and eventually put the schools under the control of a state agency known as KLIK.

But teachers have steadfastly opposed the changes, saying they were implemented without professional consensus. It's a charge that is frequently leveled against Orban and his right-wing Fidesz party. The party won a super majority in 2010, allowing them to rewrite the constitution, but saw its majority diminished last year.

Orban currently enjoys broad public support because of his hard-line, nationalist-driven, opposition to taking in refugees from war-ravaged countries such as Syria, Iraq and Afghanistan.

But this is not the first time thousands have taken to the streets to protest his government's actions. Two years ago, tens of thousands protested against the government's planned tax on Internet consumption. In a rare climb-down, the government abandoned the proposed levy.

Now, again, the government seems to have been caught off guard by the level of public anger. The government has sacked the state's education secretary and begun negotiations with teaching staff, although the teachers have dismissed the moves as cosmetic.

Orban allegedly accused the teachers of being directed by "external forces" at a closed-door party meeting last week, but it was a sentiment echoed by his chief of staff, Janos Lazar, on Thursday.

He said there were issues to be tackled but pointed a finger at "some who want to stir political trouble."