Three years after the discovery of 71 suffocated migrants in the back of a truck in Austria, the smugglers responsible have been sentenced to 25 years in prison. The ringleader was accused of "frightening indifference." 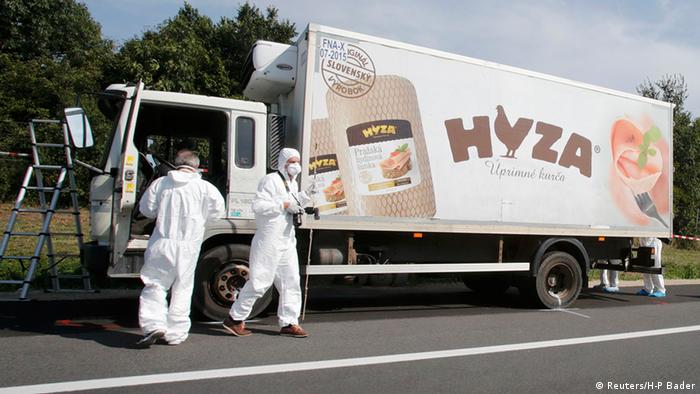 A Hungarian court sentenced four human traffickers to 25 years in prison in connection with the gruesome deaths of 71 migrants found crammed inside a freezer truck in 2015.

The four men — three Bulgarians and an Afghan national — were found guilty of "aggravated murder with particular cruelty." They included the group's Afghan ringleader, along with his two closet associates and the truck driver.

The prosecution had initially sought for life sentences for the four main suspects. Eleven other members of the smuggling ring were due to be handed down sentences later on Thursday.

The victims — 59 men, eight women and four children, including a baby — were found by authorities in Austria crammed inside a 14-square-meter cargo container on the side of a motorway in Burgenland. The migrants had arrived in Europe from Syria, Iraq and Afghanistan, joining hundreds of thousands like them at the height of Europe's worst migrant crisis since World War II.

The incident sparked international outcry and was cited by German Chancellor Angela Merkel as one of the key reasons behind her decision to open the country's borders to some one million refugees.

The trial, which began a year ago, took place in Hungary, however, because authorities found that is where the migrants had died.

The defense had maintained that the traffickers were not aware the migrants they were smuggling were dying in the back of the freezer truck. However, the prosecution had collected some 59,000 pages of evidence suggesting otherwise.

Police telephone intercepts showed that the Afghan ringleader, Samsoor Lahoo, had ordered the driver not to open the doors while the migrants could be heard screaming in the back.

"Let them die instead, that's an order," Lahoo was heard saying in one of the calls. "If they die, let him dump them in a forest in Germany," he added. The driver subsequently abandoned the truck and fled.

Hungarian prosecutor Gabor Schmidt told the court that Lahoo had shown only "endless greed" and "frightening indifference" to migrants desperate to get to Europe.

Refugees continue to cross the Balkan route into Europe that the EU-Turkey deal was meant to cut off. Smugglers show the way. Marianna Karakoulaki and Dimitris Tosidis report from Chios, Thessaloniki, Belgrade and Sid. (22.11.2017)