The latest attempt on the 6-meter high border fence came after Moroccan officials warned that the EU could prompt more people to try to cross the border unless it offered concessions in a trade dispute. 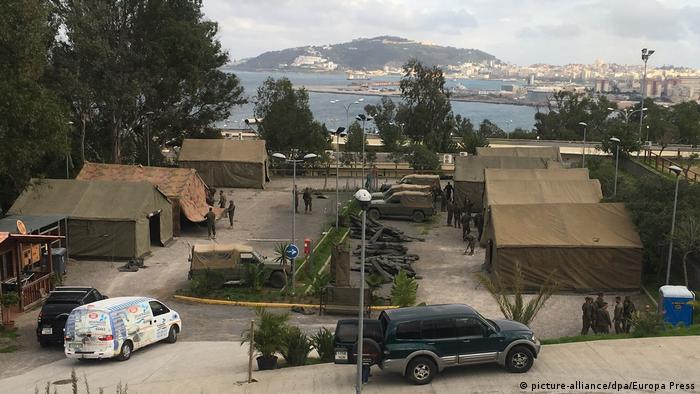 More than 850 African migrants have cleared the border fence of the Spanish enclave of Ceuta since Friday, amid trade disputes between Morocco and the European Union.

Early Monday morning up to 700 mostly Sub-Saharan migrants attempted to cross the six-meter-high double fence into the north African enclave. About 350 of them made it through but 11 were injured in the process, the Red Cross and enclave authorities reported. Three people were hospitalized with serious injuries, including two police officers, authorities in Ceuta said.

"They entered after breaking through the border gates with shears and hammers," a spokesman for the prefecture told news agency AFP.

According to the source, the group entered "in the same hard-to-control area" as an attempt on Friday, when about 1,000 migrants rushed the border with about 500 of them reaching Spain.

The Spanish enclaves of Ceuta and Melilla have the only land borders between the African continent and the EU, and are often a focal point for attempted crossings.

Surveillance of the 8-kilometer border is carried out by Spain and Morocco. Recent high winds were tripping alarms on the border fence, making it difficult to patrol, Spanish news agency EFE reported.

More than 1,400 migrants were awaiting processing at the 512-capacity Temporary Immigrant Shelter Center in Ceuta on Monday, authorities said, adding that tents had been requested to house the latest arrivals in the parking lot of a nearby equestrian center.

The mass-crossing came amid a trade dispute between Morocco and the EU over the interpretation of a free trade farm and fishing deal. In late 2016 an EU court ruled that the deal did not apply to the Western Sahara, a former Spanish colony controlled by Rabat where the Polisario Front is fighting for independence.

The court said control of the disputed territory remained unclear and the EU did not recognize it as part of Morocco.

The decision angered Morocco, which in a warning on February 7 suggested it could lead to "a new flow of migration" towards Europe and place the continent "at risk."

The Moroccan Ministry of Agriculture warned that Europe was exposed to a "real risk of a resumption of migratory flows that Morocco, through a sustained effort, managed to control."