Almost 1,000 Somali police have gone missing after their training was financed by the German government. It is feared these officers will now join forces with the Islamist militants Al-Shabaab. 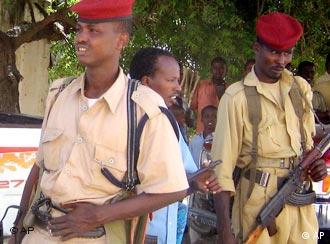 The Somali police were trained in Ethiopia, funded by Germany

In September 2009, the German government released $1 million (760,000 euros) of funding to train Somali police officers. The training took place in Ethiopia, and the new recruits were equipped with uniforms, weapons and knowledge with the aim of sending them back into Somalia to try and keep peace in the fractured country.

Two months after the completion of this training, almost 1,000 new police officers have reportedly disappeared en route to the Somali capital Mogadishu. It is thought highly likely that these deserters have left to join opposition Islamist militia in Somalia.

In a statement, the German Foreign Office confirmed that funds were released to train Somali police, and that in May 2010, 925 trained officers were transported to Somalia under Ethiopian surveillance. They did not comment on whether the police had deserted or not.

Currently, the transitional Somali government is struggling to suppress the militia, including Al-Qaeda sympathisers Al-Shabaab, who control as much as two-thirds of the country. 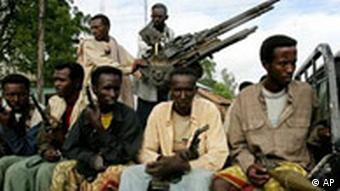 Germany is one of several countries who have committed to training security personnel as in indirect method of trying to help, without military intervention. However, according to Ulrich Delius from the Society for Threatened Peoples, the problem is that most of these newly trained recruits "leave after a few months" to go and work for the armed opposition.

"You have to ensure that these people really stay in the official army or police," Delius told Deutsche Welle. "Otherwise you are just training the people you will be fighting in a few months."

A report published by the head of the UN monitoring group on Somalia, Dumisani Kumalo in 2008, said 80 percent of trained security officers deserted their posts, taking with them their weapons, uniforms and the acquired knowledge.

At a time when the transitional government is barely keeping a hold on the north of Somalia, deserters may feel they are better off siding with the militants than the government. 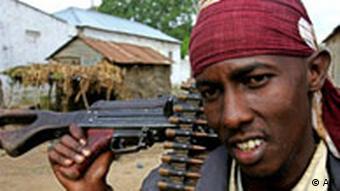 "No one is sure who will be the government of tomorrow… so they are switching to survive," Delius said. "Also, you need a weapon and whether you get it from the police or from the armed opposition, it does not matter."

He added that money was another strong incentive for joining the militants, as "Somali warlords often offer more money than the official army or police."

In this case, German media reports that the Somali police were waiting for their pay from the German government before they disappeared.

Another reason for discontent may be due to the fact that the training took place in Ethiopia – a country with a long, bloody history with Somalia.

"There's a very strong feeling against Ethiopia in all parts of Somali society," said Delius.

The German government has come under fire for not only partnering with Ethiopia, but also according to some sources, bypassing the correct United Nations procedures and ignoring sanctions against Somalia.

However, the Foreign Ministry said in a statement that it had informed both the UN contact group on Somalia and the UN sanctions committee.

In recent weeks, the government has reconfirmed its commitment to aiding Somalia, most recently at the African Union summit in Kampala. German Foreign Minister Guido Westerwelle said that the training of police in Somalia was a "substantial contribution" to stabilizing the country.

Ulrich Delius argues however that all the projects for training security forces will continue to have no effect until politicians start to "understand the root of the problems in Somalia."

Somalia is once again dominating the agenda at the biannual summit of African leaders. Experts agree that the tactics need to change in Somalia in order for peace to return to the country. (22.07.2010)

The public prosecutor in the German city of Muenster has opened an investigation into reports that a German security firm is sending mercenaries to a Somali warlord amid concerns the deal violates UN sanctions. (26.05.2010)