Hundreds arrested in election protests in Belarus | Europe | News and current affairs from around the continent | DW | 20.12.2010

Early results of Sunday's elections show that Belarusian President Alexander Lukashenko has enough votes to remain in office. But protesters and opposition candidates have taken to the streets - and were met by police. 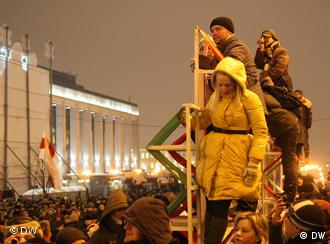 Voters are not keeping quiet about the results

When asked about how he would deal with the demonstrations announced by the opposition for Sunday evening, President Alexander Lukashenko stressed that "everything will be within the framework of the law." But, he said just after casting his ballot, "Don't worry, nobody will go out into the street."

Thousands of people chose not to agree. When the polls closed at eight o'clock in the evening, scores of people were pouring into the central October Square, where space was limited because it had been turned into a skating rink. The mood was upbeat. 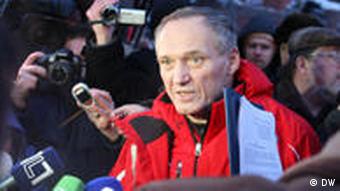 Vladimir Neklyayev shortly before being beaten up

Several of the nine presidential candidates who opposed Lukashenko's bid to stay in power led the meeting, including Andrei Sannikov and Vitaly Rymashevsky.

The man who probably more than all the others had called on the people to take to the streets on election day, Vladimir Neklyayev, was not there. On the way to the meeting, he was attacked by unidentified men clad in black and severely beaten up. With head injuries he was taken to a hospital. The sound equipment Neklyayev and his aides were carrying to be used at the meeting was taken away from them.

Just hours before, Neklyayev and four other presidential candidates gathered at the prosecutor's office to protest against the arrest of several prominent opposition members, including Dmitry Dashkevich. The leader of the youth movement Molody Front was arrested for allegedly having beaten up someone. Dashkevich was one of the chief organizers of the opposition protest. The situation was increasingly tense, especially after news broke that results of an official exit poll had been released saying that Lukashenko could count on some 72 percent of the vote.

In October Square, the opposition leaders derided the figures, saying that according to their information, the actual support for the president was not more than 30 percent. The crowd chanted "Zhyve Belarus," or "Long live Belarus," and cheered at calls for new elections without Lukashenko.

The former Czech president Vacav Havel sent a note of support to the meeting, which was read aloud. "My thoughts and those of my friends are with the people in the square," Havel wrote. "A free Belarus must join the European Union."

After Havel's words were read out, the crowd started to move in the direction of Independence Square, where the government and parliament buildings are located. The crowd had swelled to some 20,000, maybe more.

Attempts by traffic police to stop the demonstrators from marching via one of the main roads in the center of Minsk failed. Otherwise, there was no visible police presence at all. Many drivers who got stuck amid the crowds started to signal in support. Demonstrators cheered, embracing each other. "This is victory," they shouted. 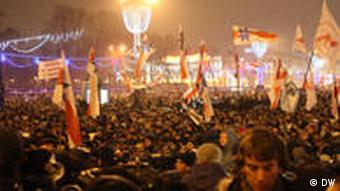 Demonstrations lasted into the night

Presidential candidate Andrei Sannikov quietly walked in the midst of the crowd, together with his wife Irina Khalip, a journalist. Asked whether this was a breakthrough he said: "I think so. So many people are fed up with this dictatorship and have gone out into the streets to protest against this play which they call elections. And yes, this is more or less what I had expected would happen."

In Independence Square, the only police presence was a car equipped with loudspeakers. A voice warned the demonstrators that they should disperse or face harsh measures. Journalists were advised to get out of the way. The crowd cheered at the sound of the church bells of the big red-brick Roman Catholic church in the square.

Soon after, the mood changed. Riot police entered the square from adjacent streets. The situation escalated when a group of youngsters tried unsuccessfully to force the entrance to the government building, in spite of calls from several presidential candidates not to do so and refrain from violent methods.

In the hours that followed, the police cleared the square using batons and arresting hundreds of people, who were put in buses and taken in an unknown direction. Andrei Sannikov and his wife were beaten up and arrested, as were other presidential candidates. Uniformed and plainclothes policemen detained youngsters as they were leaving the square. Several journalists were injured, and a Russian television crew was briefly detained. 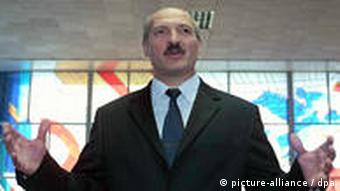 During the night, Vladimir Neklyayev was lifted from his hospital bed and taken away, as where Vitaly Rymashevsky and another candidate, Grigory Kostusev, who had been injured by police. The head of the Belarusian Helsinki Commmittee, Oleg Gulak, was also arrested. Jaroslav Romanchuk, yet another candidate, went into hiding.

Belarusian television viewers saw hardly anything of the events developing in the center of the capital. A live talk show devoted to the elections focused on the election victory of Alexander Lukashenko, which was said to be close to 80 percent of the vote or more, with a turnout of around 80 percent. Viewers could call in to say whether they thought the elections were free and fair, and 94 percent of over 30,000 callers were said to have confirmed this.

Only briefly, some footage was shown of young people storming the parliament, and of riot police battling with demonstrators. A high police officer present in the studio announced, under applause, that the square had been cleared and that "this small group" of demonstrators had been dispersed.

Voters in Belarus head to the polls to elect their president on Sunday. Known as "Europe's last dictator," President Alexander Lukashenko is expected to claim a fourth term, despite facing nine opposition candidates. (19.12.2010)

In a month's time, voters in Belarus go to the polls to elect a president. While live debates among candidates will be broadcast for the first time, analysts doubt whether the elections will truly be free and fair. (19.11.2010)