Voters in Belarus head to the polls to elect their president on Sunday. Known as "Europe's last dictator," President Alexander Lukashenko is expected to claim a fourth term, despite facing nine opposition candidates. 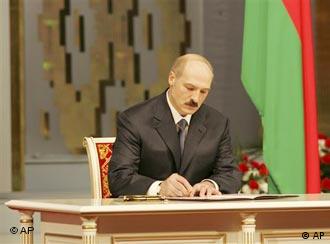 Lukashenko has been in office for 16 years

Belarusian voters have never had so much choice. In addition to the incumbent, Alexander Lukashenko, nine other candidates' names, including a poet and a businessman, are on Sunday's presidential election ballot. But Lukashenko's victory is all but certain.

At the last election four years ago there were just four candidates and Lukashenko's main opposition in 2006, Alexander Milinkevich, decided not to run and months ago called the poll a "political spectacle."

Opposition candidates have complained Lukashenko has curtailed their access to the public during the campaign, limiting their media exposure to a pair of live 30-minute radio and television appearances.

No way opposition can succeed 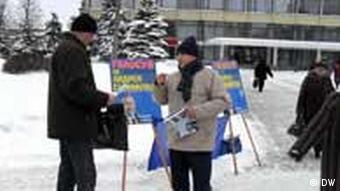 There has been little in the way of campaigning, the OSCE said

"The state apparatus is pretending when it says candidates have been offered a broad set of opportunities," Belarusian director Yuri Chashchevatsky said. "With appearances like what was offered all you can do is fail."

A preelection report by the Organization for Security and Cooperation's Office for Democratic Institutions and Human Rights found "scant" evidence of campaigning across the country. Television news was "dominated by extensive reporting on the president's activities," the organization noted.

Unlike his competitors, Lukashenko did not make use of the hour to present his program to voters in the former Soviet republic nor did he participate in a television debate among presidential candidates.

Instead, he sees the election as the only way to validate a result everyone knows has already been determined, according to political scientist Valeri Karbalewitsch.

"Lukashenko has created a situation where everyone assumes the election has already been fixed," he said. 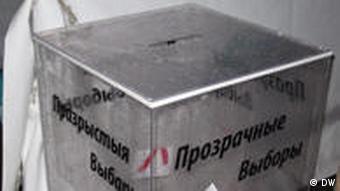 Lukashenko all but admitted to rigging the 2006 election

It's not a difficult assumption to make. The president admitted to rigging the 2006 election, in which official results showed he received 83 percent of the vote.

"I gave the order for it to be not 93 percent, but something around 80, I can't remember how much," he said in 2009. "When you get over 90, this is not accepted psychologically. But it was the truth."

After 16 years in office, Lukashenko, 56, said he is the only person with enough experience to lead the country, which did away with term limits in a 2004 referendum. Lukashenko warned opponents not to protest the election's outcome.

Thousands of protesters took to the streets after the 2006 elections in protest of the rigged poll. The demonstrations resulted in the arrest of several Lukashenko opponents, including then-presidential candidate Alexander Kozulin. 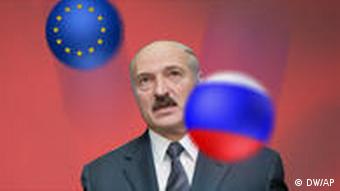 Since he first took office in 1994, in what is regarded as Belarus' last fair election, Lukashenko was a staunch Russian ally, but in recent months Minsk has annoyed Moscow by seeking closer ties to the European Union.

Russian President Dmitry Medvedev accused Lukashenko of abandoning "basic human decency" in his hunger to win a fourth term and now Russia is reevaluating its long-standing cooperation with Belarus.

In June, Russia drastically cut gas supplies to Belarus amid a row over payments, reinforcing EU worries about energy security.

Despite the new turbulence in Russian-Belarusian relations, Moscow will accept the election's results, according to Fyodor Lukyanov, editor-in-chief of the journal Russia in Global Affairs.

"Moscow wants someone else as head of state," he told Deutsche Welle. "But there is no real alternative. I think there isn't a favorite candidate for Moscow." 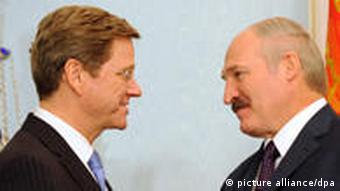 "There is a long list of conditions," European parliamentarian Justas Paleckis told Deutsche Welle. "The most important of which deal with human rights, democracy, freedom of the press and a pluralistic party system that allows a voice for the opposition."

The temperamental leader of 10 million people was accused by the Bush administration of running Europe's "last dictatorship" and has become known for dressing his six-year-old son in military uniform for parades as well as for cracking down on public dissent. Two convicts were executed with a shot to the back of the head in March this year, according to Amnesty International.

Election observers will watch over the vote for the first time since the 1994 election, but an estimated 40 percent of ballots are likely to be cast early - ahead of the observers' arrival.

German Foreign Minister Guido Westerwelle has met with the Belarusian leadership. This is a good time for the European Union to help Belarus emerge from its isolation, says DW'S Daniel Scheschkewitz. (03.11.2010)